Our earthquake response so far 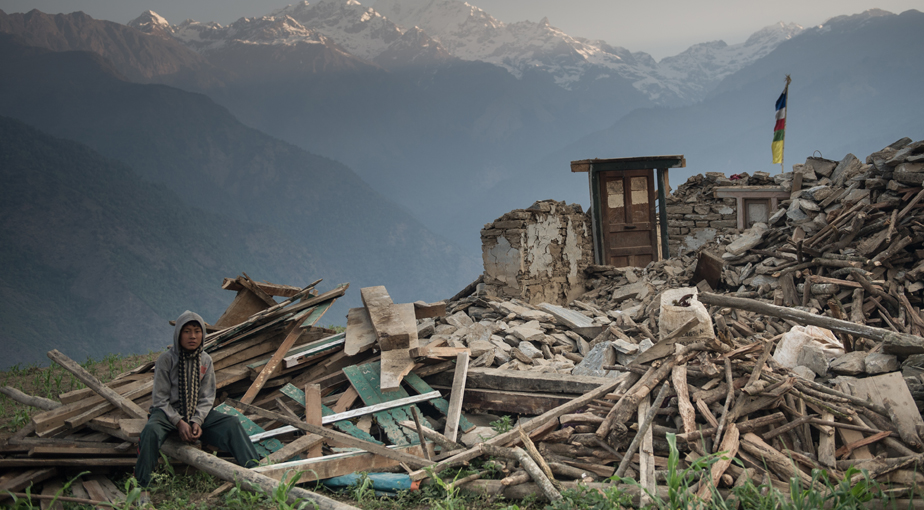 Lt Col (Retd) John White MBE is the Head of our Earthquake Response Team. Here he shares his views on the work we’ve been doing in Nepal since the earthquakes that rocked the country exactly one year ago…

It seems slightly ironic to be writing in the wake of another natural disaster in Nepal, a little over 20 years after being so closely involved in providing relief to the last one. On that occasion, monsoon rains cut the Prithvi Highway, leading to the deployment of 68 Gurkha Field Squadron from Hong Kong to build three Bailey Bridges. That was the first time that British Gurkhas had been used to provide aid in their own country and set a happy precedent that helped ease the diplomatic negotiations required to secure the deployment of Queen’s Gurkha Engineers (QGE) following last year’s earthquakes.

While wishing to avoid echoing some of the shrill hyperbole that follows any major disaster, it is hard not to be moved by the scale of damage and destruction caused in April and May last year. Many hundreds of thousands of people were made homeless with entire villages flattened, particularly in the remote areas in Gorkha, Dhading, Rasuwa, Nuwakot and Dolakha; areas that will be familiar to many who have trekked in our traditional recruiting areas and who will understand the difficulty of assessing damage and distributing aid. 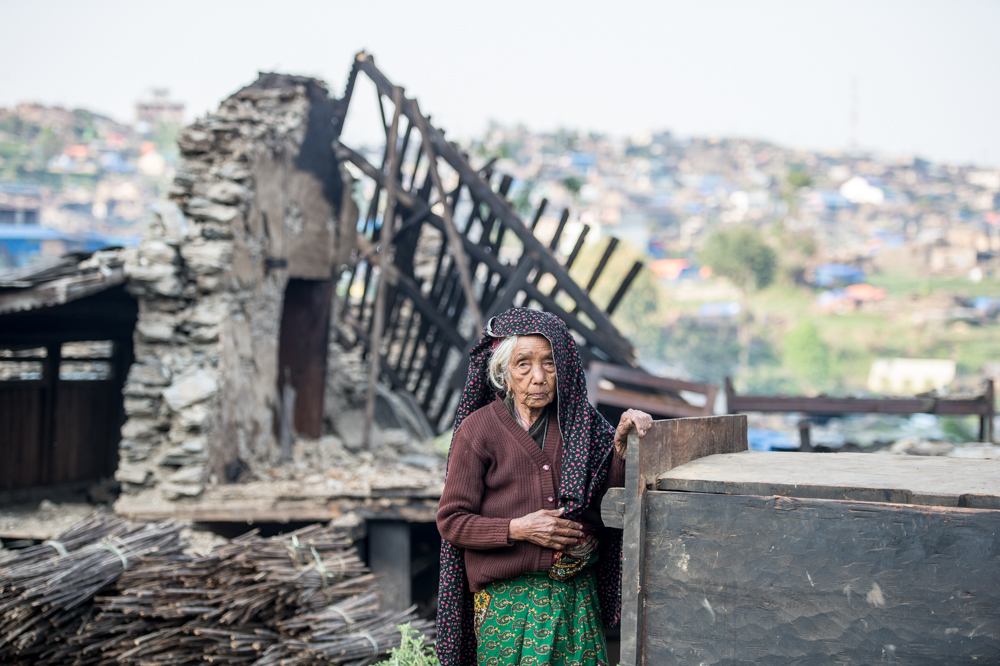 With an established footprint across the affected districts and a routine practice of working in remote areas, The Gurkha Welfare Trust was well placed to provide immediate assistance and much needed ground truth, particularly following the Gorkha earthquake. Early aerial reconnaissance of Barpak (just 10km from the epicentre) for example showed intact roofs; it was only when rescue teams arrived on the ground that the almost complete destruction was realised. Much of the international response was directed to Kathmandu and other major towns where high rise buildings posed a challenge to rescue teams and where the death toll was much higher.

Our Area Welfare Officers, mindful of the vulnerability of many of the Gurkha pensioners for whom they feel personally responsible, spent the following weeks assessing damage, directing recovery and the delivery of emergency aid in the most acutely affected areas, and acting as a focal point for the many international agencies now descending on the country.

Accurate reporting, tempered with local knowledge of the affected communities, assisted many in targeting aid where it was most needed. The Gurkha Welfare Trust authorised an immediate expenditure of £700,000 to provide shelter material in the form of tarpaulins and corrugated iron sheets as well as blankets, cooking utensils and other basic household items for those who had lost everything. Distribution of this was aided by the first deployment of QGE on what became Op MARMAT (meaning ‘repair’ in Nepali).

As well as providing much needed manpower to assist with the relief effort, 70 Gurkha Field Squadron rebuilt the Area Welfare Centre at Jiri in Dolakha district, rocked to its foundations in the first earthquake and levelled in the second, along with a number of prefabricated schools. Following a lull during the monsoon, the Squadron returned in October and, in a four month deployment under Major Chris Elworthy, built further schools and community halls in Sindhuli, Dolakha and in the worst affected areas of Lamjung and Gorkha. Most importantly for The Gurkha Welfare Trust, the soldiers built four pensioners’ houses to earthquake resistant standards. 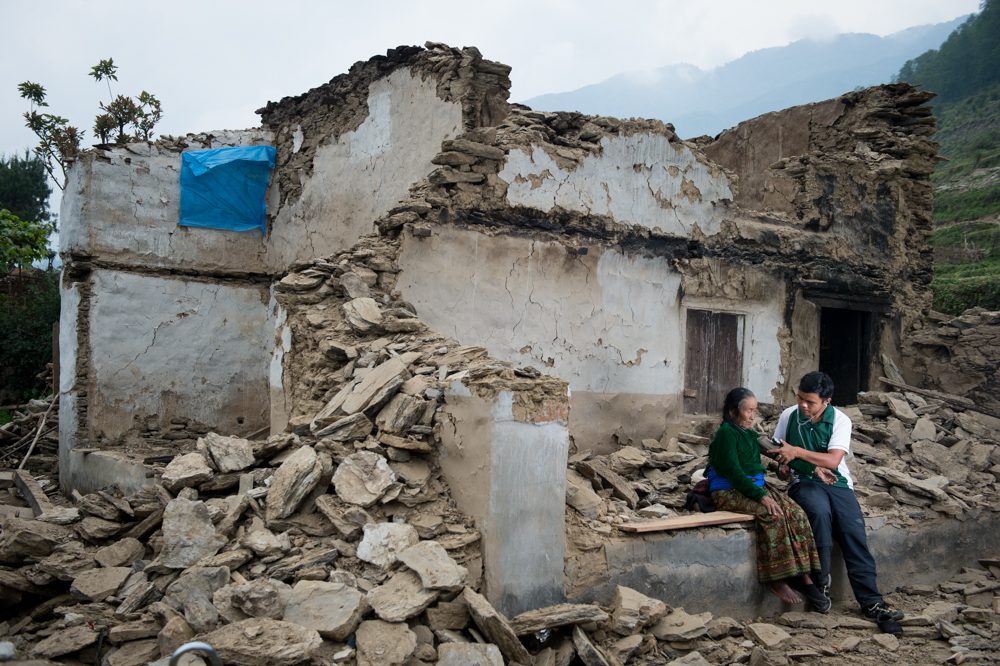 By December 2015, mindful of the need to provide shelter for our most vulnerable pensioners before the onset of winter, the Earthquake Response Team had initiated the rebuild of the first 100 of those 1,200 houses. In February 2016 Rfn Dharamsing Tamang, ex 7 Gurkha Rifles, and his wife moved into the first of these, close to the rebuilt Welfare Centre in Jiri. A five month blockade on the Indian border had increased the cost of construction materials, particularly cement and steel, and made transportation difficult, though we were keen not to use this as an excuse for not driving through the construction across the country.

When the border reopened in February, prices stabilised and we are now constructing our houses for a little over Rs 6,500,000.00 (about £4,200) using as much as we can salvage from the old site and the main expense being cement, steel and porter fees to remote areas. By the second week of April, a week short of the first anniversary, we were able to report that 50 rebuilt homes were now occupied with just under 500 at various stages of construction.

Much of my own time is spent visiting the Area Welfare Officers and young Project Supervisors who are at the forefront of this reconstruction operation. They rarely return to their Welfare Centres but move from village to village, ensuring that at each stage of construction someone is on hand to ensure our design, which conforms to standards set by the Government of Nepal, is followed. By way of example, it is a three day trek to Singla in northern Gorkha where there is just one pensioner whose house is being rebuilt.

The Queen’s Gurkha Engineers (this time 69 Gurkha Fd Sqn), are now back on the third rotation of Op MARMAT. With the monsoon likely to hinder progress, as roads become difficult to negotiate, we are now deploying stores forward so that building work is not unduly affected; our aim is to complete 80% of domestic builds by the end of the year, then pick up the rest by the second anniversary of the earthquake. Our enhanced Schools Programme will deliver nine additional schools by the end of July, when work will start on a further 13 in the 2016/17 season.

Meanwhile, at the Trust’s headquarters in Salisbury, with the effect on fundraising of our Royal visit still to be assessed, interest is being generated by small donors in raising the funds for sponsoring homes. At a relatively modest £4,200 a pop (20% of which is provided by the UK Government by way of Gift Aid) this is proving affordable to regimental associations, Rotary circles, dinner clubs and even individuals…not to mention my own daughter and her friends at university who have set up a Just Giving page and are embarking on an innovative series of fundraising activities which will earn them the gratitude (and, at no extra cost, a plaque marking their efforts) of a pensioner in Dhading district whose new home will be built this year.

Please note, the views expressed in this article are those of the individual staff member, rather than the Trust as a whole.