The Gurkhas are soldiers from Nepal who are recruited into the British Army, and have been for the last 200 years. Gurkhas are known to be as fearless in combat as they are good natured in daily life.

To this day, they remain renowned for their loyalty, professionalism and bravery.

Where do the Gurkhas come from?

Gurkhas are traditionally recruited from the hill people of Nepal, who trace their roots right back to an 8th century Hindu warrior, Guru Gorakhnath.

They first encountered the British in 1814, when the British East India Company fought against them during the Anglo-Nepalese War. British forces admired the Gurkhas’ military abilities and honourable tactics, and first recruited Gurkha troops in 1815.

The Peace Treaty that ended the war in 1816 enabled the British to officially recruit Nepali Gurkhas – and so began Britain’s relationship with Nepal, our ‘oldest ally’ in Asia.

Best of the best

Since then the Gurkhas have served with distinction throughout the world, earning an incredible 13 Victoria Crosses for acts of extreme valour, along with countless other medals.

“If a man says he is not afraid of dying, he is either lying or he is a Gurkha.” 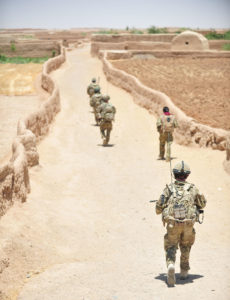 Gurkha soliders on patrol in Afghanistan.

1. The Gurkhas have served with loyalty and distinction for over 200 years.

Their bicentenary in 2015 was celebrated by HM The Queen, Prince Harry and many others around the world.

2. British officials in the 19th century declared the Gurkhas a Martial Race, a term describing people thought to be “naturally warlike and aggressive in battle”.

3. Rifleman Kulbir Thapa VC, the first Nepali recipient of the Victoria Cross, had never even been under fire until the battle where he heroically earned his medal.

4. Gurkhas are famed for carrying a kukri – the national weapon of Nepal also used as a work tool. The legend goes that whenever a Gurkha draws his kukri in anger he must also draw blood…

5. The Gurkha selection process has been described as one of the toughest in the world. It culminates in the gruelling doko race, which involves carrying 25kg of sand while running up a steep 4.2km course.

7. Soldiers in today’s Brigade of Gurkhas each donate one day’s pay every year, in part to support their forebears – the older veterans in Nepal.

8. During the World Wars, stealthy Gurkha soldiers would sneak up on dugouts in the dead of night and feel unsuspecting inhabitants’ boots to find out if they were friend or foe – Axis and Allies had different ways of tying their laces.

9. In 2015, a devastating earthquake struck Nepal, destroying the homes of many ex-Gurkhas. The Queen’s Gurkha Engineers deployed to help with rebuilding efforts in an exercise known as Op MARMAT (‘rebuild’ in Nepali).

10. Captain Rambahadur Limbu VC is the last surviving Gurkha VC holder, having earned his medal in Borneo in 1965. His citation claims that his actions that day “reached a zenith of determined, premeditated valour which must count amongst the most notable on record”.