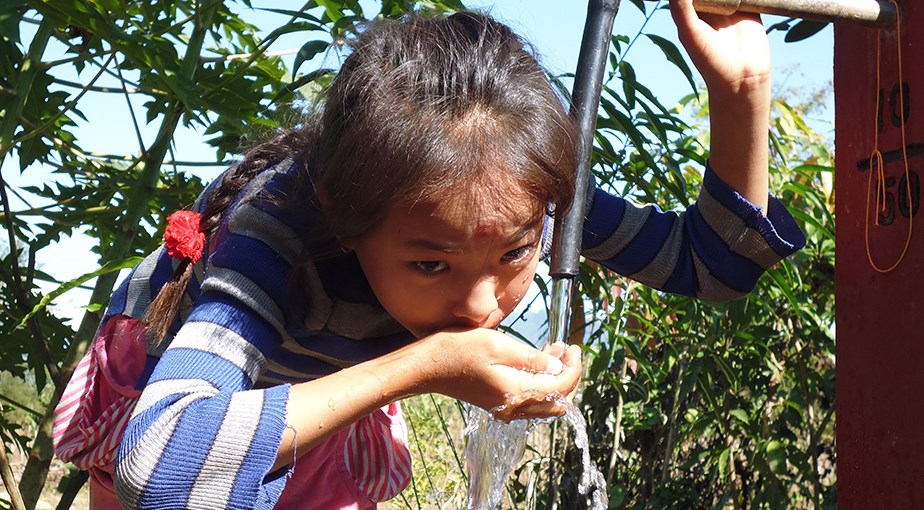 Buddha Gurung is a Construction Engineer in our Rural Water and Sanitation Programme in Nepal. Our water projects install individual tap stands for households, bringing water to people’s doorsteps. We also provide water facilities for schools and health posts.

We recently met with Buddha to ask him what it was that inspired him to work in this area, and what keeps him motivated.

Namaste, can you tell me a bit about yourself please?

Yes, my academic background was in architectural engineering. I obtained a diploma from Pulchowk Engineering College, Kathmandu in 1992. After that, I worked for 3 years in Butwal for UMN.

Yes, in an establishment called BTI, or Butwal Technical Institute within which UMN had an office. After 3 years there, I joined GWT in 1996.

What made you join GWT? What was your motivation?

Actually, my father is an ex-British Gurkha.

He was in QGE (Queen’s Gurkha Engineers) and he retired in 1987.

His name is Bhaktabahadur Gurung. I don’t know his officer number, but his soldier number was 21148962.

He retired as a Captain and then he also worked for GWT for about 3 years before I joined. He was in RWSP.

RWSP meaning Rural Water and Sanitation Programme. Which is a department within GWT, its Drinking Water provision department.

Yes, he was a Project Manager for 3 years. I was working in Butwal then, and he used to show me photos of his projects and talk about his work with RWSP. I didn’t know a lot about GWT then, but when I learnt that they provided drinking water I realized it was something I would be interested in; so I asked my father if I could also join his organization. Later, in 1996, a design section was formed from local Nepalese overseers.

Yes. Before that, serving personnel from the Royal Engineers in UK used to do all the survey work. But quite often, work used to be done in haste because of the short tour lengths of these (British) technicians leading to problems with the projects. Hence it was decided to employ technically qualified personnel from within the country, so I became the first of these to be working for RWSP.

I’ve changed roles 3 times since joining. Firstly I was a Project Surveyor and Designer (PSD). Then in 2003 I got promoted to Design Engineer for East Nepal and was based in a town called Itahari. I did that for 4 years, validating and providing improvements to designs with the latest technology available, and helping my colleagues. In 2007 I was further promoted to Construction Engineer (CE) and this is what I am still employed as.

My primary task is to work out project costs and prepare purchase orders. I have 5 project managers and 16 project supervisors working under me.

What was your largest purchase order?

In Rolpa District, about 5 million Rupees worth. And in Gilung Village, Lamjung District where the source was about 13 km from the village, our project supervisors had to make 3 stops when going from village to source.

So it took them 4 days and 3 nights to make the distance?

No, they had to spend 10 to 15 days working at the source and then about a week each in 2 further locations along the path of the pipeline. So they spent almost a month and half supervising work just along the pipe route.

What was your most memorable experience?

It was in 2003 I think. I was a PSD and it was in Tara Village, in Okhaldhunga VDC and District, a very remote and backward place, and very dry. One member of each family had to be a water herder, their task to fetch water all day.

Providing water for the family took them the whole day?

Yes, once that person left home to fetch water, they would only return after 3 and a half to 4 hours. And it was also the first time I had seen an especially designed bamboo basket which could accommodate 2 water containers. They would leave at 6 a.m. and return at about 10 a.m. No one wasted water. Even used water was saved for the livestock to drink.

So we surveyed the project and although the source was very distant from the village, we eventually completed the project. I wasn’t there for the opening ceremony, but I was told that when water started flowing into the reservoir tank in the village, not one villager’s eyes were dry. I will never forget my time there.

What are the problems of drinking water in Nepal?

The Government’s aim is to provide safe drinking water to all citizens by 2017.

There’s only one year left.

Yes, one year. I very much doubt the target will be achieved.

And our policy is not only providing potable water but also to teach and improve good hygiene and sanitation practice in the communities. So water provision and sanitation go side by side in our projects.