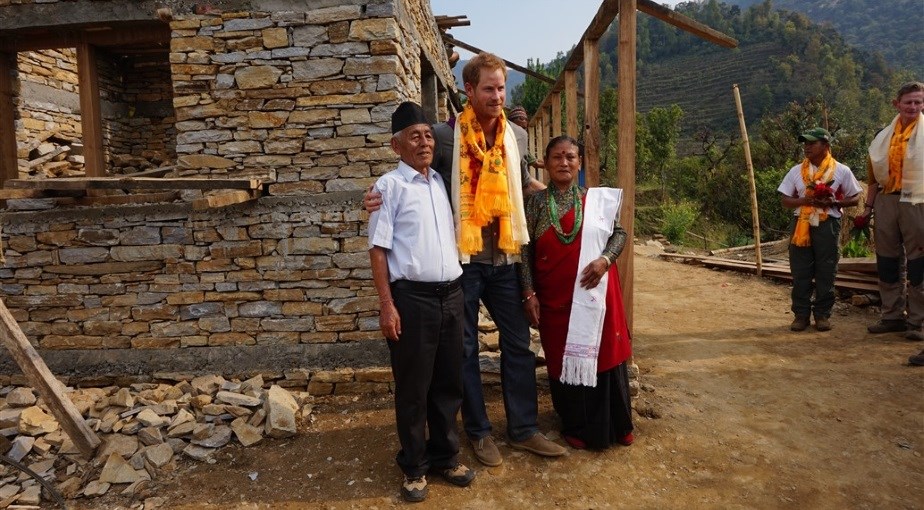 This week, we were honoured to welcome HRH Prince Harry to some of our rebuilding projects in Nepal.

The Prince met pupils and staff from Gauda School, located in Okhari village in the district of Lamjung. The school was totally destroyed during last year’s disaster.

We’re working hard to rebuild Gauda, which had stood since 1962, and hope to finish it by August this year. It forms part of our wider programme across Nepal which will see us build around 60 schools by the end of 2020.

As well as visiting the school project, Prince Harry has also been busy spending time with some of our Welfare Pensioners. On 21 March, he visited a Gurkha veteran and two widows from Lamjung district, whose homes we are currently rebuilding. 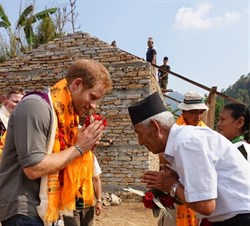 77-year-old Lance Corporal Rajman Gurung (pictured), fought in Brunei and Malaya, and is one of around 1,200 former Gurkhas or their widows whose homes were destroyed by the quakes – we hope to rebuild at least 80% by the end of 2016.

Rajman said: “It’s a great honour to be visited by a Prince and friend of the Gurkhas. I hope that this visit will help other people like me to get the support they need.

“Without GWT’s support, I would not be able to make ends meet. Even 40 years ago, GWT built me a house when I had none. And then after the earthquake destroyed my home, I am getting help from GWT again to rebuild it. It will be complete in about a month.”

Speaking in Kathmandu ahead of his visit to Lamjung, Prince Harry expressed his personal appreciation for the visit:

“I am so grateful that I will have the opportunity to pay tribute to some of Nepal’s most famous ambassadors, the Gurkhas, admired the world over for their fearsome bravery and courage but also for their humility and kindness.

“I served alongside Gurkhas during my first tour of Afghanistan and I look forward to visiting the communities that have produced and supported these extraordinary soldiers.”

As we approach the first anniversary of the devastating earthquakes, the Prince had a clear mission in visiting stricken areas, where he hoped to pay his respects to those who perished and highlight the plight of those who are struggling to recover:

Our work in Nepal

We’re thankful to our Welfare Pensioners, school pupils, GWT staff and more who made this visit possible, and of course, Prince Harry himself. His visit has drawn attention to the vital work we continue to deliver across Nepal.

We estimate spending around £18 million on our earthquake response over the next four years, building or repairing around 1,700 Gurkha homes, 600 water supply systems, 220 schools and 16 community centres across Nepal.