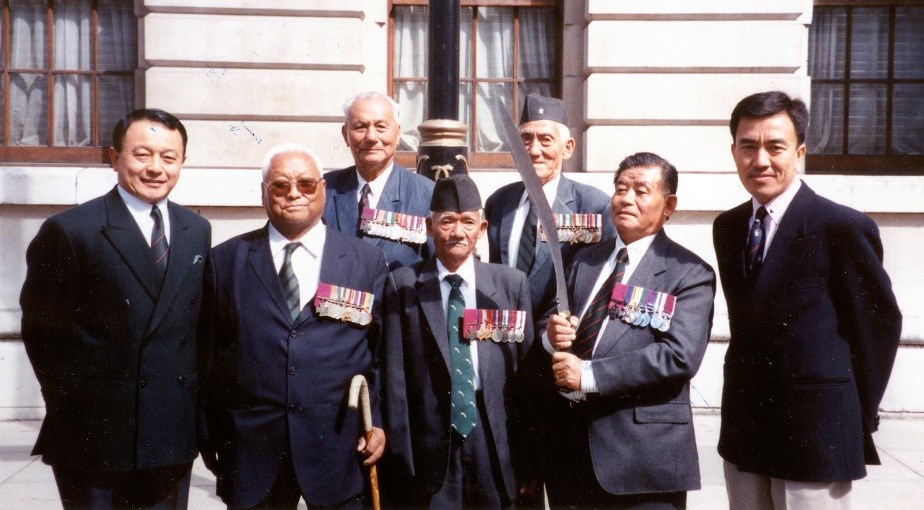 A day to remember

This Remembrance Day, we’re looking at some WWII veterans with a strong connection to the Trust. As we remember those who fought and died to protect our freedom, we think also of those who lived and who need our help today…

At 101 years of age, Balbahadur is one of our oldest pensioners but is still active and generally in good health. He moved to Pokhara 12 years ago from Yangjakot village, where he’d survived as a subsistence farmer since returning from WWII.

After his wife’s death in 2011, he moved to live with his youngest son and family of five. As his main source of income, Balbahadur uses his GWT welfare pension to help pay for the family’s food.

During the war, Balbahadur saw extensive action with the 2nd Gurkha Rifles, who fought throughout North Africa and later in Italy.

Like most soldiers, he experienced his share of victory and defeat. In Tunisia, his regiment once captured several hundred Italian soldiers in a single manoeuvre.

In Libya, his section of eight friends was sent to attack a German outpost. Only two of them returned.

Balbahadur also fought in the infamous, protracted battle for Monte Cassino in Italy. Although ultimately victorious, the Allies suffered heavy losses over the 4-month struggle and the 2nd Gurkha Rifles, ever fearless in attack, lost many of their number.

Balbahadur can still remember the intensity of the fighting, a far cry from the peace he enjoys today. He thanks the GWT’s supporters for helping him to reach his ripe old age.

To help us support veterans like Balbahadur, and their dependants, please donate today. 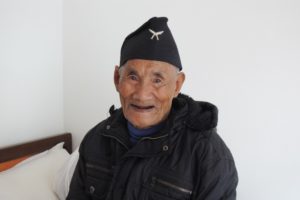 Rifleman Sancha Bahadur Tamang signed up in 1943 and was instantly involved in heavy fighting during the Japanese invasion of Malaya. There were many casualties, including Sancha who was shot in his left leg and right arm. He was at hospital for just two months before re-joining his battalion.

Sancha remembers the awful reality of war. He and his friends starved for days, eating unripe papayas found in the jungle just to keep alive. He adds with a smile that sometimes they even picked up the biscuits left by their enemies.

After the war ended, he was discharged in 1946 and returned back to his village in Bhojpur district. He continued with subsistence farming and started a family.

He spent years struggling to support his family with no source of income. Fortunately, he was granted the welfare pension in 1991 which relieved his destitution. Sadly his wife passed away in 2006 and he found himself living alone in little more than a shack. He was in poor health, lonely and isolated.

Sancha arrived at our Residential Home in Dharan in December 2013. With our care, his physical condition has improved remarkably and he’s now fit enough to look after himself and walk unaided. He often goes for a morning stroll.

Sancha has settled in well. He’s socially very active and has rediscovered his love for singing and dancing (especially dancing!). He says life is much easier and less lonely in the home, and he’s very happy to be here. 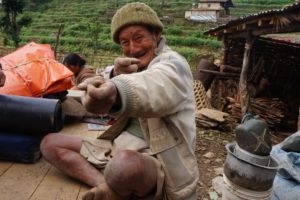 93-year-old Rifleman Sunbir Tamang was enlisted into the 4th Gurkha Rifles in January 1944 and fought in Burma with the legendary Chindits. Operating deep behind Japanese lines, these troops were up against some of the toughest conditions facing any soldiers during WWII.

Sunbir has received our welfare pension since July 2000, when he first discovered our aid. His wife sadly died in May 2006 and he’s since lived with his youngest son in a remote village called Mather in the northern hills of Gorkha district.

When the April 2015 earthquake struck, Sunbir was attending an outdoor funeral in his village and was fortunate to avoid injury. His house was not so lucky.

A total of 47 homes in Mather were destroyed including Sunbir’s. Since then, his other sons and their families have been living together in a makeshift shelter.

Our field team visited Sunbir after the quake to give him an emergency cash grant and supplies including food for his family. Despite his losses, Sunbir was full of energy and his sense of humour hadn’t dampened in the slightest.

When one of our staff asked him how he kept smiling, Sunbir said: “Well, I’ve seen worse cases than ours. I console myself and am happy that my family is alive. Why should we keep grim faces? I’m sure the Trust will help me!”

We certainly will. Sunbir’s home, along with those of around 1,700 other Gurkha veterans or widows, will be rebuilt or repaired as part of our earthquake response.