After the earthquake: Gurkha engineers and the GWT 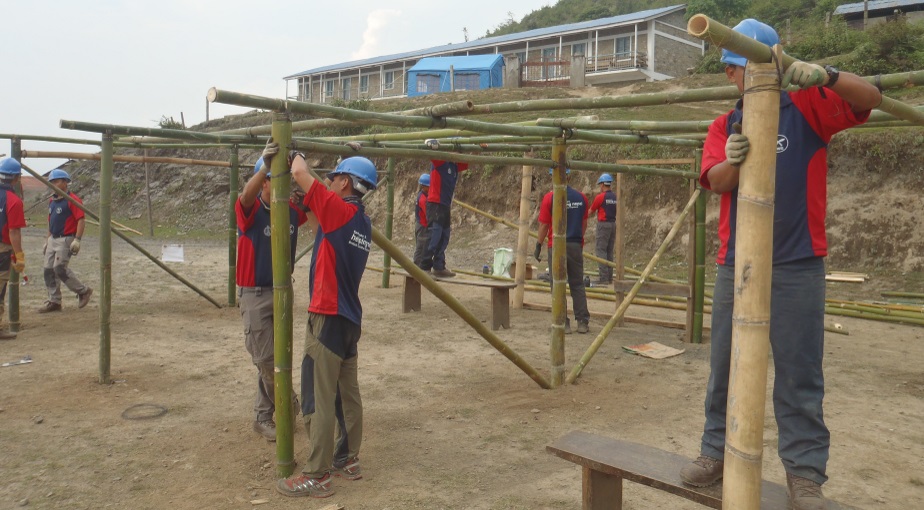 On 26th April 2015, Sergeant Eka Bahadur Rai of the Queen’s Gurkha Engineers (QGE) was in the depths of Somerset, near Minehead, enjoying a mountain biking instructor course.As he descended from the treeline of the forest where they’d camped, his phone picked up signal for the first time that weekend. He heard a message alert, then another, and then they wouldn’t stop.

One hundred messages later, Eka had learned all too well about the disaster that had devastated his homeland only a day before. At that point, all he felt was shock and fear for his loved ones back in Nepal. He didn’t know then that he would soon be flying home as part of the Brigade of Gurkhas’ earthquake response unit, working alongside our own field team.

Now, as he returns to Nepal for a second earthquake mission alongside The Gurkha Welfare Trust, we’ve caught up with Eka to learn about his own experience of the catastrophe…

What can you tell us about your service with the Gurkhas?

I’ve been part of the British Army with the Queen’s Gurkha Engineers for 14 years now. In that time, I’ve been deployed on active tours of Iraq and Afghanistan, as well as major construction exercises in Belize, Cyprus and Kenya, where we also worked with local communities.

Were you personally affected by this year’s disaster?

I’m originally from Solukhumbu, the same district as Mt Everest, which was hit quite badly. My old primary school, for instance, was completely destroyed by the earthquakes.

My family now lives in Kathmandu and my first priority was to check on them. I was so relieved to learn that they were okay. Having seen the destruction first-hand, I know that I’m very lucky, very fortunate that my family is alive and well.

What was the feeling among the Brigade?

Initially it was total shock and worry for our friends and families. People were very sad, but mainly we wanted to get out there and help. I think everyone would have left immediately if they could.

In the end, around 90 personnel from QGE were selected to go out, and we left a few days after the first earthquake.

Where were you based in Nepal?

What did you do while you were out there? 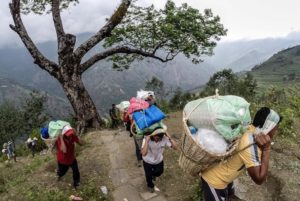 We were part of Operation MARMAT (marmat means ‘rebuild’ in Nepali). Our main focus was distributing emergency aid supplies and shelter provided by the GWT, as well as compiling damage reports for response planning.

I was in the advance party for our team, which meant that I would go ahead and recce the damage, route details and so on to produce sit reps for the relief effort. This feedback allowed them to direct aid efficiently to where it was needed. Throughout, we liaised with Nepali authorities and community leaders.

This role meant that I was arriving first on the scene, often before any other outside aid, and seeing the worst of the earthquake’s impact. It was hard to witness, but also meant the aid was all the more vital and the locals were very grateful.

When we could, we also helped with some simple things like clearing rubble. In some places, we built toilets to try and avoid the spread of disease in affected areas, or temporary classrooms where children can continue their education.

How did it feel to see your home country so devastated?

We’d seen the damage of Kathmandu on the news but it doesn’t prepare you for the initial shock. In the isolated hill areas, the level of damage was unseen and quite appalling. However, you get used to it quite quickly and get on with the job at hand.

How were citizens coping with the disaster?

There was a great sense of sadness and loss, but there was also an incredible community spirit and mutual support. Everyone was affected, so everyone had to help each other get through it.

We saw a lot of people sharing supplies and resources. They were always very happy to see us, of course. They often offered us food and tea, despite the fact that their houses and stores lay in ruins.

It was always sad to come across places where mothers and children had been killed under the rubble. On our way to Manbu (a village in Gorkha), we met an old man who had lost his daughter-in-law and all his grandchildren, only his son was left.

Because of the work we were doing, we were often the first to arrive in damaged villages. We saw people dying of their injuries, people eating leaves for days on end, people struggling to survive. That was difficult to see, but it’s also where the motivation comes from.

How has being in the Queen’s Gurkha Engineers prepared you for this role? 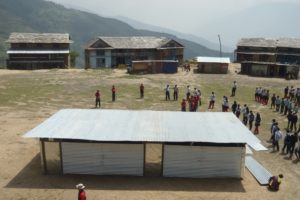 Our work and training has prepared us perfectly for these situations. It gives us all the skills necessary to respond: technical knowledge of construction, being physically able to face demanding conditions, working in coordination and making sure we act efficiently.

It also makes us better at improvising and working with what’s available. For example, our design Cell came up with a design for a simple corrugated metal shelter using the material provided by the GWT. We could then show villagers how to build these shelters with the tools we gave them.

How did the relationship between GWT and QGE work in Nepal?

GWT provided all the aid materials we distributed and directed our work in coordination with British Gurkhas Nepal. It gave us sit reps on the ground from before we arrived. Without them, we would have been working blind.

Where the roads were still accessible, we were also occasionally able to share GWT transport.

What do you think of GWT’s work in Nepal?

We were very impressed with GWT’s projects. Everywhere we went we could see its work because we were compiling the damage reports. GWT’s support is clearly making a big difference for those communities.

It’s doing a brilliant job looking after our veterans, though I was pleased that it wasn’t only focusing on the ex-servicemen but on whole communities, because everyone was affected and everyone needs the support.

We are preparing to return for Operation MARMAT 2. Now that the monsoon is over, we hope to begin longer-term construction projects for GWT, such as repairing and rebuilding homes, schools and water projects. All the guys are very keen to get back and begin this important work.

What message would you give to GWT supporters?

Thank you for everything you’ve done for our people and our country in this difficult time. This support is deeply appreciated by everyone we worked with and aided in the devastated areas.

And for those who can, please keep it coming. Even a small amount will be a big help back in Nepal.

Eka is now back in the field with his fellow Queen’s Gurkha Engineers and GWT, where they’ve begun work on Operation MARMAT 2. To support the cause, please donate to our Earthquake Response Fund.