‘Martin Gillott was a historian, a philosopher, a poet, an artist, a joker, an entertainer, a loyal friend and firstrate soldier.’ 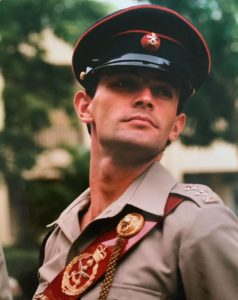 A challenge in honour of Martin Gillott

Having grown up around the army – his father, Peter, served with the Royal Hussars for 33 years – Captain Martin Gillott started his own military career in December 1987, boarding a plane bound for Hong Kong to join his own regiment, the Queen’s Gurkha Engineers. During his military career Martin operated in Nepal, Thailand, Malaysia, Borneo and Brunei where he spent time helping those in need, including the supply of clean water to rural villages in communities with either no access of their own, or water which was unsafe.

Once a Gurkha, Always a Gurkha

In 1995, Martin joined a four-man team to take part in Hong Kong’s most demanding race, the 100km MacLehose Trail. The infamous Gurkha training route sought to test endurance and teamwork and was the exercise that Trailwalker UK was founded on!

‘He was generous, he was outrageous, he had an infectious smile…’

Sadly, Martin was diagnosed with Pancreatic Cancer in July 2020. In typical stoic fashion, following his diagnosis, Martin set himself the challenge to run from Lands’ End to John O’Groats. He had hoped to achieve the challenge in a month, which would mean tackling 30 miles a day – all of this despite the fact that his cancer had already spread from his pancreas to his liver. Tragically, Martin passed away in October last year, before he was able to take on his incredible challenge. Martin was a great supporter of the Gurkhas, and his close family and friends are keen to continue that legacy.

The LEJOG team is led by Martin’s wife, Miranda, and close friends, Charles, Tom and David – and is formed of several of Martin and Miranda’s closest friends. Respecting Martin’s original challenge, the team will be setting off on Sunday 12 September from Lands’ End and cycling over 1,000 miles before ending their extraordinary efforts in John O’Groats on Sunday 26 September.

Funds from this epic journey will be raised to help rebuild Shree Bhagwati Higher Secondary School in Nepal, which sustained considerable damage in the devastating earthquakes of 2015. This rebuild will not only provide a safe working environment for staff and students but also improve access to education and in turn offer a better future to Nepali children. By naming a school building in Martin’s honour, we want to honour his legacy – a Gurkha to the end, with a passion for helping others.

Help us raise £2 with every £1 you donate

If you would like to support the team in their efforts, and donate towards the building of Shree Bhagwati, your donations will be doubled. A generous donor has agreed to match-fund donations to The Gurkha Welfare Trust through this appeal, up to the value of £40k. Meaning that your support can go even further.