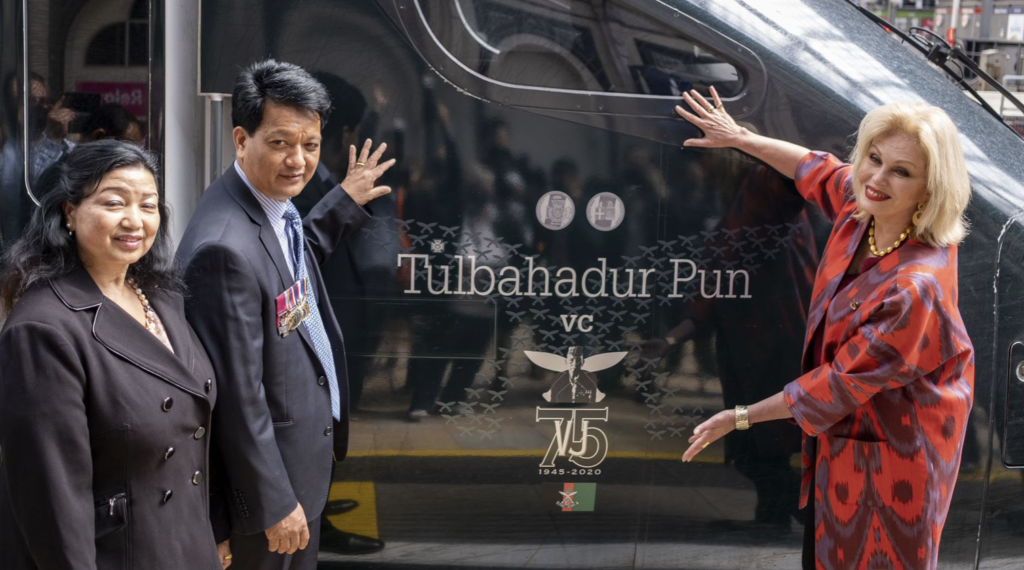 Great Western Railway have named one of their inter-city express trains in honour of Tul Bahadur Pun, one of 13 Nepali Gurkhas to have received the Victoria Cross.

Pun’s son Arjun and daughter Megh Kumari were joined at a heart-warming ceremony at Paddington Station by The Gurkha Welfare Trust Vice Patron Joanna Lumley, CEO of the Trust Al Howard, Colonel Jody Davies, serving head of The Brigade of Gurkhas, members of the Gurkha Brigade Association as well as the Gurkha Museum.

Tul was only 21 and serving as a Rifleman in the 3rd Battalion of the 6th Gurkha Rifles when his heroic actions at Mogaung, Burma on June 23rd 1944, led to him receiving the Victoria Cross. The award is he highest honour for gallantry available to British and Commonwealth forces.

Having seen several members of his platoon killed during an attack on a railway bridge, Pun continued the charge alone, killing three enemy soldiers and forcing five more to flee.

He then gave accurate supporting fire, enabling the rest of his platoon to reach the bridge. Later rising to the rank of Honorary Lieutenant, Pun was awarded 10 other medals including the Burma Star.

“I shall never forget the moment I met Lachhiman Gurung and Tul Bahadur Pun, who fought so bravely as Chindits with my father in Burma.”

“I believe we all owe brave veterans like this an immense debt of gratitude – for going above and beyond the call of duty to protect our freedom. That is why The Gurkha Welfare Trust will always be a charity immensely close to my heart, allowing me, allowing us all, the chance to give something back, and to help these brave men and their widows live in the dignity they so richly deserve.”

“We are honoured to be naming one of our Intercity Express Trains after Tulbahadur Pun VC, who displayed such commendable bravery in the Battle of Mogaung in 1944.

“We at Great Western Railway have a long history of naming trains after Great Westerners, the past and present heroes from across our network.

“It is right that we honour some of those heroes of the war effort, remembering the sacrifice, bravery and tenacity that later generations owe so much to.”

This tribute to Tul Bahadur Pun is an example of The GWT working in a mutually beneficial way with a nationally recognised UK business, helping us to bring to the forefront the immense sacrifices, bravery and loyalty that Gurkhas have provided to this country over the past 200 years. Any business interested in working in partnership with The GWT please contact David Watson, Corporate Partnerships Officer