The founding of The Gurkha Welfare Trust 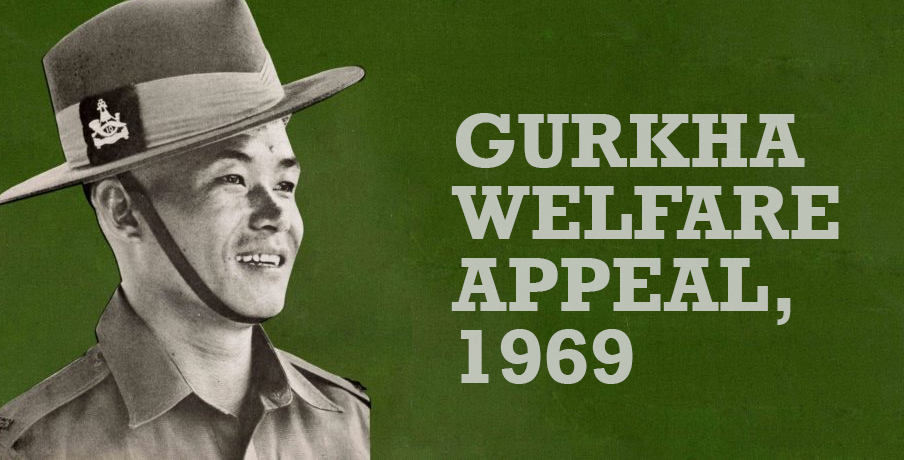 In the late 1960s a great number of Gurkha soldiers and their dependants or widows in Nepal faced destitution in old age.

More than 500,000 soldiers from Nepal had served in the two World Wars; however many had not completed the 15 years needed to qualify for a British Army pension. Unlike their British counterparts who could rely on the UK welfare state in their old age, the Nepali Gurkhas had no such safety net. 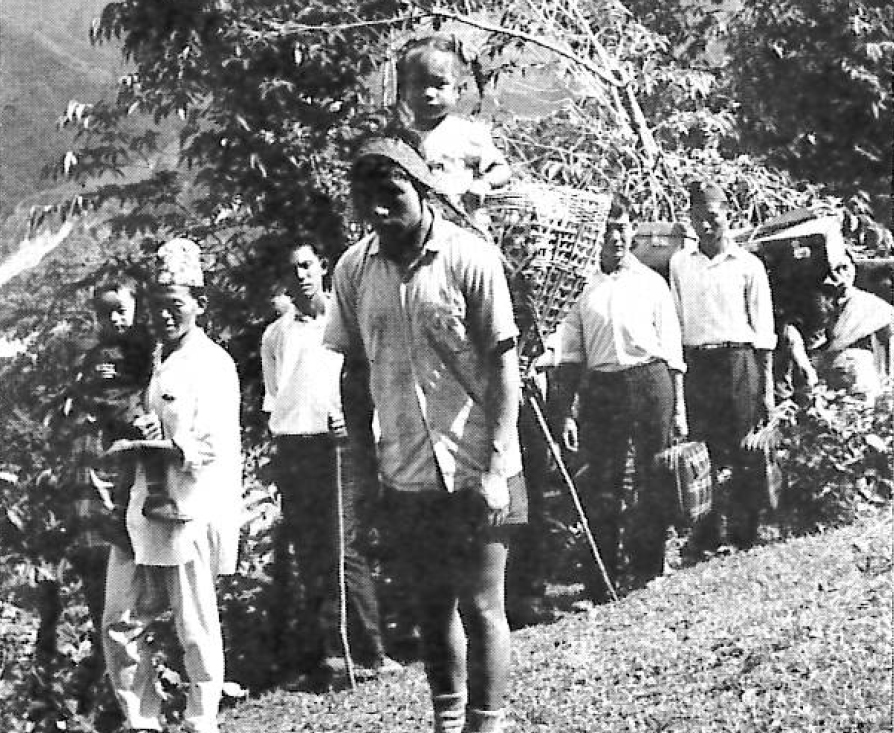 From our original appeal in 1969: Redundant Gurkha soldiers on their way home with their families

During this time Anthony Wieler was coincidentally in Nepal on a world tour as an investment manager with the Ionian Bank. During a stay there he met with his friend Brigadier Peter Myers who spoke of the Major General of the Brigade of Gurkhas (General Patterson) and his concern for the veterans he’d seen and the hardships they were facing.

Mr Wieler was no stranger to the task of fundraising for military causes, as his father had been instrumental in raising funds for the Army Benevolent Fund in the previous decade. He encouraged Peter Myers to request permission to begin a fund or foundation to support the Gurkhas and they approached Sir Gerald Templer to front the campaign.

Sir Gerald had previously recommended that Anthony Wieler should serve in the 7th Gurkha Rifles for his national service because Sir Gerald was at the time the Colonel-of-the-Regiment for 7GR and had been a good friend of his father and was pleased that Mr Wieler had founded the Varsity Match between Oxford and Cambridge for the Modern Pentathlon. However, having raised money for the National Army Museum in the previous year, Sir Gerald referred the Gurkhas to Field Marshal Lord Harding, Colonel-of-the-Regiment of 6GR who agreed to be Chairman of the Gurkha Welfare Appeal committee and proved to be an outstanding success.

The initial strategy was that the fundraising should be conducted in stages, starting with the Brigade itself in Hong Kong and then in the City, the counties, the Commonwealth, and then the rest of the world, particularly the United States.

The Office for the Appeal

Initially the planning was co-ordinated by the Brigade of Gurkhas Liaison Officer in the War Office and Colonel Charles Wylie became the secretary for the appeal committee when Peter Myers had established the venture.

The Ionian Bank provided a spacious office in Moorgate in the City and at 2pm on 22 December 1969 the first Trustee meeting of The Gurkha Welfare Trust was held.

The Trustees had set themselves the ambitious target of raising £1million (over £11million in today’s money), with the notion that this sum would provide for Gurkhas in need ‘in perpetuity’. Such has been the demand for the services offered by GWT that today the Trust spends over £22million supporting veterans or their widows.

Anthony Wieler remembers the period as one of much activity: 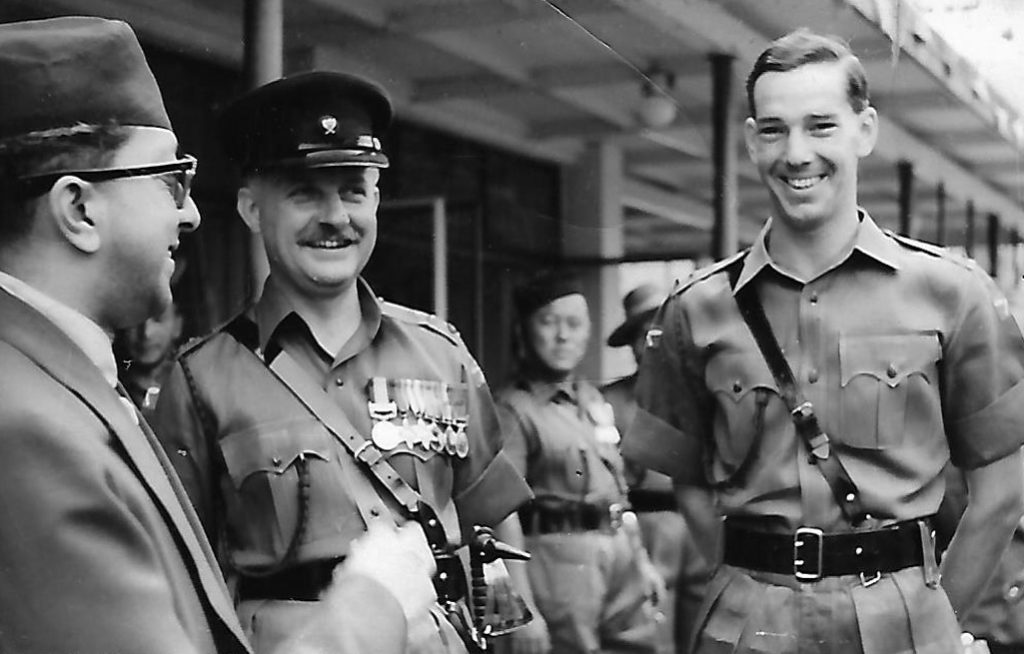 Anthony Wieler on his national service, 1960

“Her Majesty the Queen questioned why we had not asked her to do anything other than accepting her generous donation and the film premiere for Alice in Wonderland then became a royal occasion in aid of our appeal.

Having become aware of Her Majesty’s enthusiasm for the appeal, Lord Mountbatten promoted ‘ a night of a hundred pipers’ in the Albert Hall and the Mayor of Westminster provided Marks and Spencer with a venue for a dress show attended by the Duchess of Kent.

Our street collection was highlighted by the ladies at each door of the Stock Exchange encouraging generosity with the suggestion that it should be ‘paper money only’.

Rambahadar Limbu VC had been shown the Stock Exchange and Gavin Sorrell, recognising my guest had called for three cheers. Lord Ritchie, the chairman of the Stock Exchange invited our hero onto the floor of the Exchange to walk between the ranks of cheering brokers and jobbers, which Rambahadar was heard to remark that it equalled the excitement of Buckingham Palace. He was accompanied by Kit Maunsell MC who had supported me in starting the Gurkhas in Athletics in Hong Kong as respective sports officers for 7GR and 10GR.

I had benefited from an exceptional National Service including 10 weeks as Acting Adjutant; moving camp, changing the observation post, doubling the swimming period, appointing a new contractor and getting to know the leading Chinese families as well as the British businesses who were so generous at the start of our appeal (Hong Kong and particularly the Kadoories, raised the first hundred thousand pounds which the local investment team increased to two hundred and fifty thousand. When we were asked by The City ‘how much have you raised?’ we had an answer.”

An Appeal in the Times

With fundraising work continuing around the world, an appeal for support from the British public was placed in the Times on 25 June 1970. The advert, which was arranged by the Trust, was signed by an unprecedented eight Field Marshals, all of whom were well known to the British public as a result of their leadership during WW2. It is transcribed in full below:

Sir, May we claim the courtesy of your columns to draw the attention of your readers to the National Appeal for The Gurkha Welfare Trust and to ask for their support?

The Gurkhas are the oldest and staunchest allies and have served with us for over 150 years. Nearly half a million Gurkhas fought side by side with British troops in the two World Wars winning 26 Victoria crosses and suffering 43,000 casualties. Their good comradeship has always been a source o strength to our own soldiers. We believe that everyone in this country owes them a great debt for their loyal and devoted service in numerous campaign over many years.

When a Gurkha leaves the British Service, he faces a difficult future in Nepal, a country with limited resources and a basic industry of subsistence level agriculture, subject to frequent natural disasters, floods and landslides. They, and those who depend on them, are frequently in need of financial support to restart their life as civilians, to tide over a period of illness or other misfortune, to relieve poverty, suffering or distress.

H.M Government provide an annual grant to meet the overheads of the Welfare Scheme but a capital sum of £1,000,000 is needed to meet the many deserving cases that will increasingly arise as the turndown of the Brigade of Gurkhas proceeds.

By their own remarkable efforts the Gurkhas have raised £250,000. We have to look to the general public to provide the rest and we trust your readers will respond generously to our appeal. We submit that in this case not only is our charity involved but out honour too. 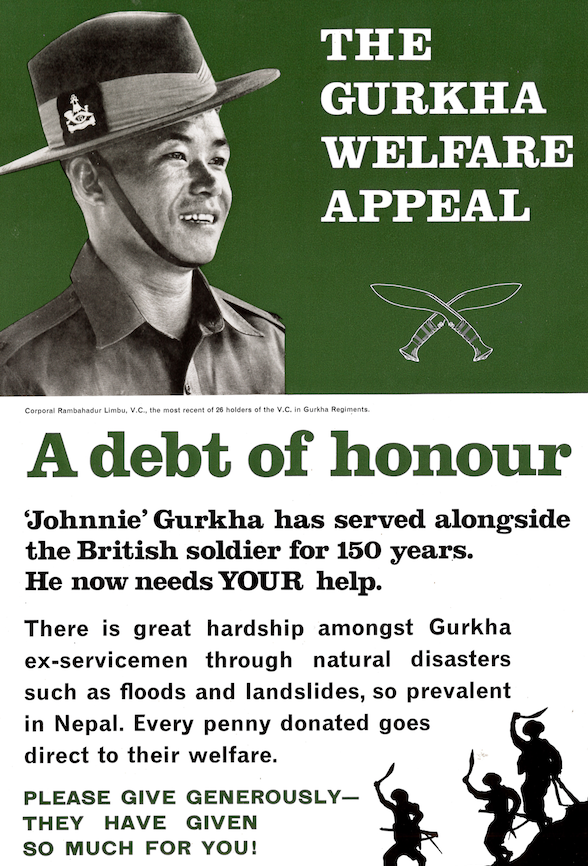 The response to the initial appeal was spontaneous. It was clear that the British public saw the need to help the Gurkha veterans and widows in Nepal and that they recognised just what an incredible service the Gurkhas have given this country.

That initial appeal and incredible show of support cemented the Trust as its own entity. The organisation went from strength to strength, creating a network of bases across Nepal as well as a team of dedicated staff (many of them Gurkha veterans themselves) to help the distribution of aid.

Years later the Trust formalised the distribution of funds and began paying what is now called the Welfare Pension payment, and expanded their remit to include comprehensive medical care as well as community initiatives like schools and water/electricity projects across Nepal.

The Kadoorie Agricultural Aid Association, prompted by our Appeal in Hong Kong in 1968, has continued to donate many millions in support of our projects and Sir Edmund Hillary’s Himalayan Trust has given similar assistance, particularly in the Taplejung District. Together we have provided a Welfare State for the families who have stayed in Nepal.

This year, 2019, we celebrate our 50th anniversary