Bringing clean water to the Nepali village of Simle 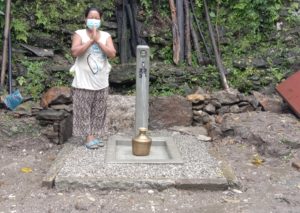 Residents in the village of Simle, Khandbari, were delighted to have recently had taps installed outside each of their homes. The new water system is one of many we plan to deliver this year as part of our work to bring clean water and sanitation to communities across the country.  New water taps were also built for the local school, Shree Indreni, replacing a single tap that had been damaged by the devastating earthquake which struck Nepal in 2015.

“There was a scarcity of water in this village,” said Durga Devi Rai, the principal of Shree Indreni Basic School. “We are very happy to have water not only at my home and in this school, but to have water in this whole village. We now have no problems regarding water. There is fresh, clean drinking water everywhere…we used to store water in a container and give it to the students. Then the government gave us water. But now, it is very easy – the students drink water straight from the tap.” 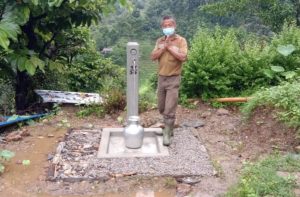 Prior to The Gurkha Welfare Trust’s involvement, residents of Simle had to share communal water taps, with one tap divided between six or seven households. Not only was it time-consuming, but often people had to go without water when there simply wasn’t enough to go around.  The communal taps were also prone to blockages and other damage and as a result, villagers often traveled for over an hour to collect water from local rivers and canals instead – a practice which is extremely unsafe.

All of the pipes connected to Simle’s new water taps were laid three feet underground to prevent damage from natural disasters and other accidents. 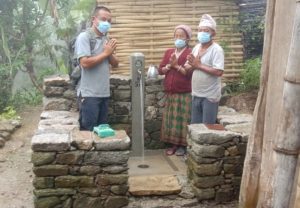 “Before, as we had to go very far to collect water, we could not wash up whenever we wanted, we had to stay dirty sometimes. We had no time to give baths to our children and it was so difficult before. Now, I am so happy that GWT brought this project to this village,” said Naina Kala Rai, a resident of Simle. “The water is also very clean, which means we won’t be sick from any waterborne diseases. Before we would collect water, but that was not always clean, and we used to live in fear of us or our children having diarrhea and catching other diseases.”

Naina Kala Rai recounted the many difficulties faced when she had to collect water and bring it home. Her Doko baskets regularly broke, she would fall on the forest’s slippery path, and she would often get bitten by leeches. Occasionally she even had to balance a full basket of water while carrying a child on her back. Now, the tap installed at her home by The Gurkha Welfare Trust brings a constant supply of clean water and saves her from facing these struggles ever again. As a result, she has more time to work in the fields, cook food, and provide her children with the education they deserve. 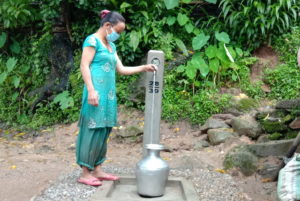 Before wrapping up the project, The Gurkha Welfare Trust delivered training to the community on how to maintain their taps to prevent future breakage and ensure the system’s long-term viability.

“We worked together as a team in making this project successful,” said Binod Kumar Rai, chairman of the water project. “I am now very relieved and happy with the work of the GWT. So, I want to thank the GWT, the donors and all the people involved in this project from the bottom of my heart and wish them good luck in the future.”