The Impact of Clean Water

We visited Upallo Arkhala village, a relatively small community of around 1,000 people located three hours (via land rover) from our office in Chitwan, South Nepal.

In 2013 we installed a water project in the village with individual tap stands for all 132 households. Previously the village had a communal tap drinking water system installed by the Nepal government around 25 years ago but the supply was insufficient and the water was not safe to drink. Instead, people had to queue for hours or fetch water in containers from other water sources (pictured).

Upallo Arkhala village before we installed the water project in 2013

Since the introduction of the tap stands, people’s lives have changed drastically. Sickness levels have fallen as a result of improved hygiene, crop yields are better and the lifestyles, particularly those of women and children, have improved.

We talked to 14 year-old Prijana Pulami Magar, who is a student at a nearby school: 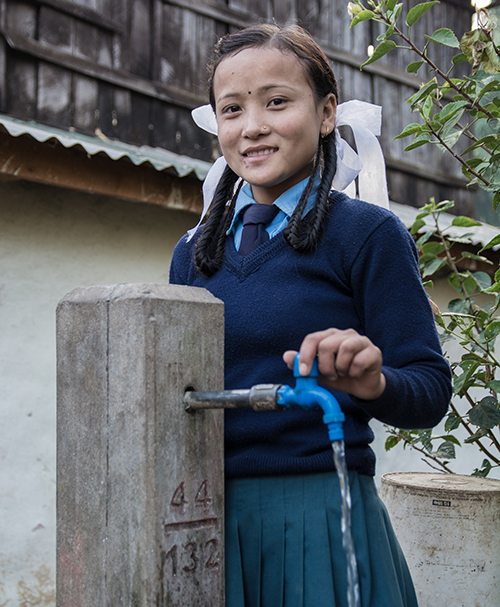 “I remember we had to stand in line to collect water from the community tap and because of the long queue, we would, at most of the times, be late for school. Our teacher would give us a scolding.

“We also had to do the same thing in the evening and it meant we had less time to do our homework. We now have clean water at our home, school and also the school toilets.

We also spoke to other villagers about how the clean water has impacted their lives since 2013:

“I used to wake up at 4am every morning to put the water containers in a queue or walk 30 mins to a stream in order to collect water. We did not have a proper toilet so it was very difficult for us women especially.

“Now, we neither have to wake up early or walk far to fetch water.”

“Before, it was very difficult for my family and I as the community taps supplied water for a limited time only. So, in order to be ahead in the queue, we used to wake up very early morning, 3/4 am, and place the water containers. Even then, sometimes the water would run out and we would have to return empty-handed.

“This would mean we could not cook our meals or prepare the children for school.

“Now, we have water right on our doorstep. This is wonderful!”

Creating a business from clean water

When the water project was built in 2013, Buddhi and Kalpana started a vegetable farm in the small patch of land they own.

“I am not trained in this field but I have learned to grow vegetables commercially. We grow carrots, cabbage, cauliflower, spinach, coriander, garlic and potatoes. All our products are consumed in the village. The biggest cauliflower we have grown weighed 3 kilos. Although we have to pay for the water, I am content because the business is good.

“Our children help us sometimes. Today, my youngest daughter is helping us water the tomatoes.

“We are able to make a profit of 60 to 70 thousand rupees annually. And, all our products are organic.”

The man who made it happen

Kewal Singh Thapa made the initial application for the water project. After retiring from the police, he has dedicated his time to improving the lives of the people in the village.

“We had acute shortage of water. The communal water taps provided by the government did not have sufficient supply. The community was unaware of sanitation. People used to leave their domestic animals stray in the village. We did not have proper toilets. Health problems like diarrhoea and dysentery was common.

“I think The Gurkha Welfare Trust’s approach to the project played a very vital role in changing the people’s perception. I know it was hard for the social supervisors that visited and worked with us in the initial phase. Their involvement in bringing together the villagers in meetings and awareness programme made a significant impact.

“I was so impressed by The Gurkha Welfare Trust’s work ethics that I then passed around the message to the nearby villages who had similar water shortages.”

You can find out more about our community aid here.