Watch: Beside every great man… 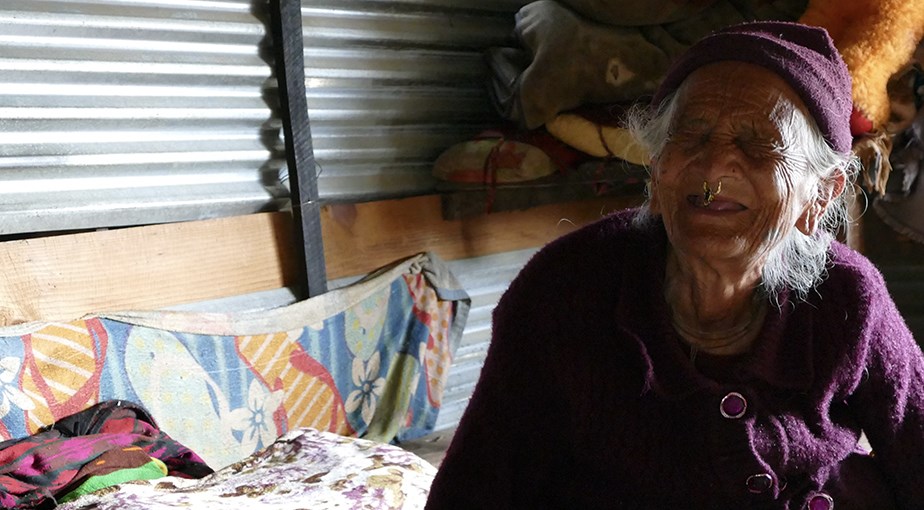 Dilbahadur Ghale is one of those many Gurkha heroes whose names remain largely unknown.

As a soldier in the Second World War, he fought in the same battalion as another man from his home district – Gaje Ghale – who went on to earn a Victoria Cross. Gaje was an exceptionally brave man and his name will rightly be remembered, but for every soldier who receives such recognition there are countless more who do not.

A medal for gallantry

Dilbahadur did receive a medal for gallantry – an Indian Distinguished Service Medal (IDSM). It was one of around eight that he brought back from his extensive campaigns. The medal’s citation gives a glimpse of his courage:

“On the night [18 February 1944] in the CASSINO Sector, the [Battalion] was ordered into an attack in the hills in the vicinity of Monte Cassino Abbey. This [rifleman] was a member of forward section. Soon after crossing the start line the [section] came under intense automatic D.F. fire which wiped out all except himself and wounded him.

“He pressed on alone and joined his platoon commander and with two other survivors of the platoon, the party made an assault on the first of a series of enemy M.G. posts. Rfn Dilbahadur Ghale singled out the right hand German and killed him. The German paratroops in the post fought until they were killed. Although wounded again Rfn Dilbahadur joined up with the attack on the next post which, in turn, was wiped out by this gallant few.

“This young Rifleman’s courage under the most trying conditions – he was the sole survivor of his section – was a source of inspiration for all ranks.” 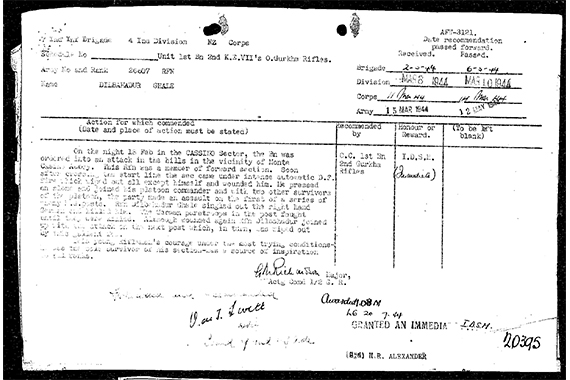 While Dilbahadur was away on 11 years of loyal service, he left behind his wife, Tulsi Maya, and their five children in Gorkha district – the heartland of the Gurkhas.

Tulsi Maya was proud of her husband’s bravery, but she was also aware of the risks:

“I was very worried that he would be hurt. There were around nine people from our area who had been killed, including my own brother-in-law.”

Eventually, she persuaded him to leave the army and return to their home – a tiny village in the remote foothills. “He was very proud to have been a Gurkha, especially his IDSM. He liked to tell stories from his war days.”

“We settled into life as farmers. He was a hard worker so we had enough to get by, so long as he had a bit of raksi to keep him going!”

The family remained in the village. They started receiving the Trust’s Welfare Pension around 30 years ago and, when Dilbahadur sadly died in 2001, it was transferred to Tulsi Maya.

“It makes a big difference. I can buy food or help my grandchildren. Without this money, life would be very difficult.”

This is all the more true at the moment. During the earthquake on 25 April 2015, her family lost everything.

“Five of us were out on our veranda. It happened very quickly – the house crumbled and collapsed, but it fell the other way from us or we’d have been buried under the rubble.

“We were very lucky that day. If it had happened at night, if it had fallen a different way, we’d be dead. We still lost all the crops we’d stored.

“My neighbour carried me away to somewhere safer. Everyone was crying but not me! What’s the point? It’s better to laugh for being alive.”

This response typifies Tulsi Maya, a resilient woman with a sharp wit. Her composed attitude was much needed after the disaster. The family spent a couple of weeks under a makeshift shelter before deciding to move to a different village lower down. The GWT came to provide metal sheets for a temporary shelter as well as emergency supplies and a cash grant.

Tulsi Maya became blind around 30 years ago following an infection. It makes life in the hills all the more difficult, especially given her current condition, but she remains stoical.

“I can’t do much since I lost my sight. I can eat and I can talk! That’s okay for me; I’m happy enough. Why worry about things that have already happened?”

Even so, spending two years in a makeshift shelter has been incredibly hard. She lives with her grandson’s family, including two great-granddaughters aged five and eight. 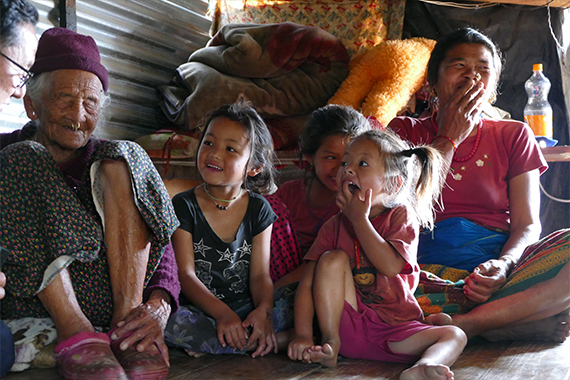 “Because I can’t see, it’s hard to move around. There’s no toilet here. We can’t even stand up properly. It’s too cold in winter, too hot in summer and wet during the monsoon. We’re always worried that the shelter will blow away or that the children will hurt themselves. I’m looking forward to having a proper house at last.”

Her home is among the latest to begin in our reconstruction programme. She was finally able to purchase some land with the help of her grandson, who is working in Qatar. Construction is still in its early stages.

“I can’t wait to move in to the new house and out of this shelter. I hope to build around it in the future. We’ll all be squeezing in – there are nine of us here.

“Without your help, we couldn’t do anything. We’d have to go back to our old village and put something together out of the rubble. Instead we’ll have a proper house. I need a bed. I need a house that won’t fall down. I’m told it will have beautiful windows even though I won’t be able to see out of them!”

It pains her to move around so she can’t make the long journey to our nearest welfare centre. The nearest public health post is over two hours of tough terrain away. Fortunately, she is visited by our mobile team, most recently by a nurse in February 2017 who provided her with medication for her pain.

“I’m always happy to see the GWT doctors. They are friendly and helpful. They are respectful to me and call me ‘mother’, which I like.”

Thanks to the Trust, Tulsi Maya is finally able to rebuild her life after all the hardship she’s faced.

I’m proud to have been married to such a brave man, and I’m thankful that the people he helped are helping me now.