Our South West Branch has participated at the annual Royal Cornwall Show over the past 20 years.

The Show runs over three days – this year from Thursday 7 to Saturday 9 June. Colonel Mike Allen, Branch Chairman and Captain Harry Griffett, Branch Honorary Secretary set up the stand at the Showground on Wednesday 6 June, with help from the military.

Other units participating included RAC, RA, the Rifles, the Paras, AAC, AGC, RAMC, RLC, REME and Cornwall Cadets, along with a team from Army Recruiting. Adjacent to us was the Climbing Tower which was a big draw with the youngsters. 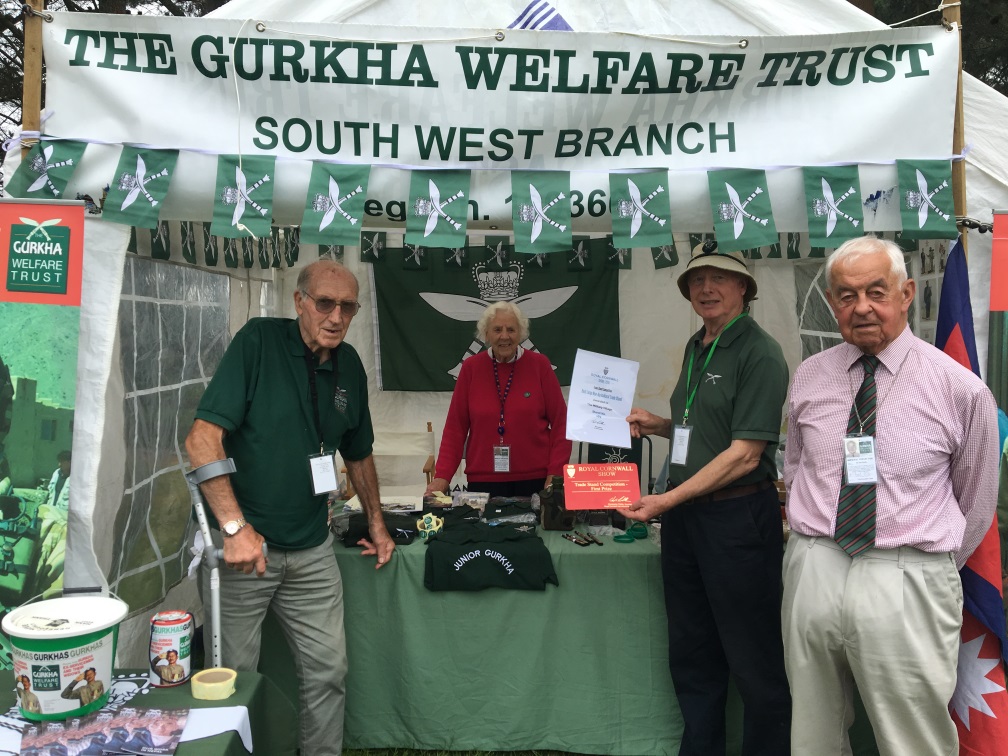 Many events take place at the Show, which includes a big agricultural element. It is invariably attended by a member of the Royal Family and this year’s show was attended by HRH The Prince of Wales. We were blessed with fine weather and attendance over the three days was about 125,000.

Our stand was manned each day by four of our team of Branch helpers, who engaged with the Public. As always, many people came forward to talk about their family and other connections with the Gurkhas. Whilst many people gave donations and bought items on display from the Gurkha Museum Shop, our most important role as a Branch is to be a visible presence and reminder to the Public of the Trust.

On the second day, it was announced by the Show Committee that the Military Family stands, which included our stand, had been awarded the Best Stand of the Show Award (non- agricultural division). The photograph shows our stand, manned that day (left to right), by Commander (formerly RN) Jim Eastley, Colonel (formerly 7 GR & 10 GR) Mike Allen, Mrs Eastley and Captain (formerly LI) Harry Griffett.

Our joint participation with the “Military Family” at the Royal Cornwall Show was undoubtedly a success which, hopefully, will be repeated next year.

Our South West Branch covers Devon and Cornwall. If you are interested in helping, please contact the head office  or Mike Allen, the Branch Chairman by Email: mikeallen.newbridge@outlook.com