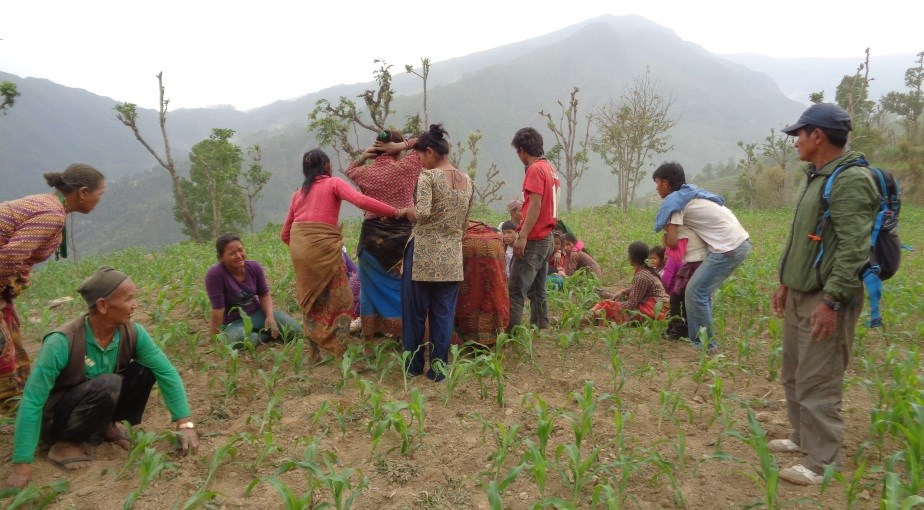 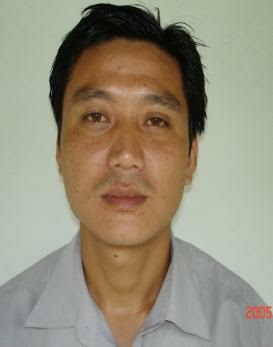 Thakur Prasad Gurung is a Social Supervisor in the Trust’s Rural Water & Sanitation Programme (RWSP). He works with communities to improve their general sanitation and make successful use of their water projects.

On 25th April 2015, Thakur was in Deurali village in Nuwakot district, a proposed location for a project later in the year…

“The project work at the village was in its last phase of preparation and my task was to complete it with Community Resource Mapping. Therefore, at around 0645 I headed out towards the village meeting place along with the project sponsor, Mr Surya Bahadur Tamang.

“The community meeting started at 0730 and ended at 1100. Surya and I went back to his house for lunch at around 1130. After lunch we had agreed to hold a second meeting at 1400 at the school ground for a final Community Resource Mapping session.

“On finishing my food, I went to the outdoor toilet in order to freshen up and get ready for the next meeting. Suddenly, I heard a huge noise like a helicopter flying over my head and then the ground below me started shaking. I soon realized that it was an earthquake. I came out from the toilet but couldn’t stand still or walk far due to the overwhelming shaking of the ground. So I sat down by the side of a septic tank nearby.

“A young mother of a neighbouring house rushed out towards me crying and in desperation thrust her four-month old son in my lap saying, “What’s happened to my baby’s eye?” It was mud which had fallen down on the baby’s face. I pulled her down to ground and helped to clean her son’s eye.

“The earthquake’s tremors continued. It was a horrible moment, with the huge mango tree by the house shaking dangerously in front of us and the splash of human and animal waste coming out from the septic tank. The houses were shaking loudly and suddenly Surya’s house, where I was staying overnight, collapsed violently. When the shaking faded, I carried the baby and led the young mother by her hand and climbed up to the rough road which I thought was access toward safety at that moment. Surya and my porter thought I was buried inside the collapsed house. They were shouting my name but were not getting any answer and started to search here and there. At that moment I heard their calling and replied from the roadside. They were very relieved to see me alive and safe! 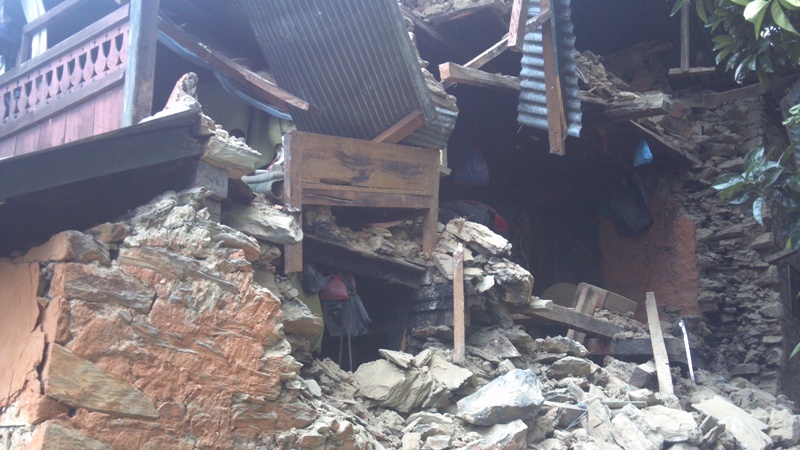 “To my horror the ground started to shake again with an even bigger bang. The shaking continued for short periods but it felt like hours. I could hear cries of villagers and animals everywhere; it was a terrifying moment. Mud and stone houses with slate roofs started to collapse one by one. The surroundings were now covered with dust and it looked like a battlefield. In the afternoon at around 1600, the earthquake gradually subsided and we all started to gather in one place. We collectively decided to round up tarpaulins and tents and make a shelter because it was cloudy and about to rain. The cowshed tarpaulins were used for night stay. About 22 people including several women with new-borns just a few days old slept under one tarpaulin shelter.

“I managed to adjust myself to the situation and spent three nights with the community in that communal shelter. I walked around the village with the locals and helped them to pull out the body of a deceased old lady. We managed to rescue two young ladies who were trapped in a semi-collapsed house and sent them to the health post for a further health check-up. We pulled out dead animals from the collapsed shelters and buried them to avoid the spread of disease. The school toilet was found badly damaged and the school area had many huge cracks. 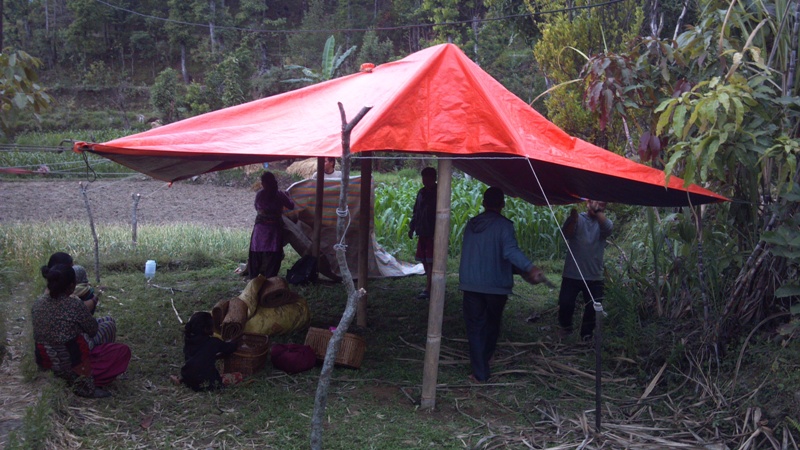 “I thanked God and my fate”

“The drinking water from the existing source had yellowish mud coming out of it. My porter collected rain water from the tarpaulin during the rain and boiled it for drinking. I advised the community to do the same so as to avoid diarrhoea. On the third day, a few villagers including myself and the porter started falling sick with a bad headache. I think it was due to the pervasive dust, bad odour of gas and lack of oxygen in the air.

“Due to the unbearable circumstances, I had no choice but to abandon my work and head back to our HQ to report the incident and the inevitable consequences for the project. On 28th April 2015, I bade farewell to Surya and the community with whom I’d shared the unthinkable experience of that terrible earthquake, and I returned to Pokhara.

“I thanked God and my fate that the meeting for second Community Resource Mapping process was planned at that particular time of the day. It saved my life and many villagers too, although sadly some were not so lucky.”