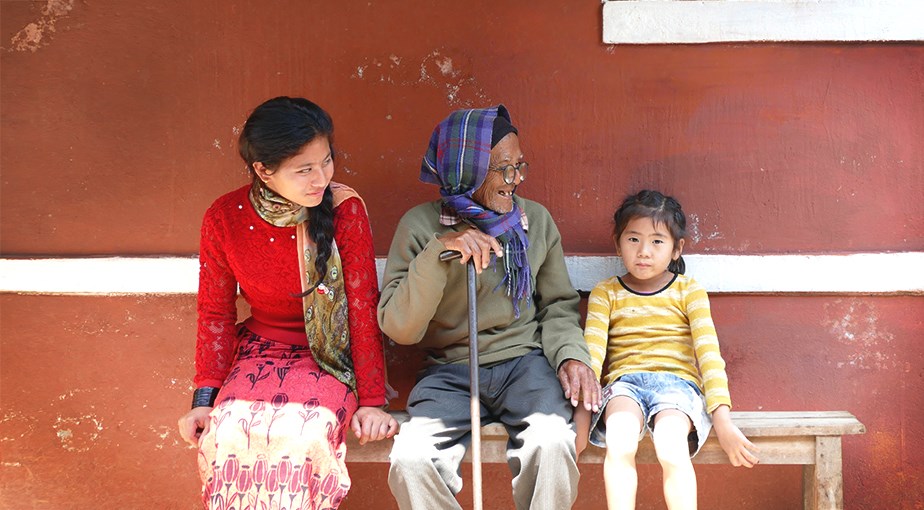 Technically Lance Corporal Damar Bahadur Thapa Magar lives very close to our Welfare Centre in Gorkha. In the foothills of Nepal, however, roads snake around steep slopes and journeys are rarely short.

Damar lives in one of our new earthquake-resistant buildings which we constructed after the disaster in 2015. Surrounded by great-grandchildren, he recently told us of his experience of the Second World War.

Damar served with the 2nd Gurkha Rifles in North Africa, where he trained as a Signalman. They moved on to Italy in the final years of the war and he put his new skills to use as a radio operator for his Company Commander. He proudly remembers tapping out the Morse code he had learned.

“We fought our way through the country. Many of my friends were killed there, so many that we didn’t have time to stop and mourn.”

“I was in the same battalion as Lalbahadur Thapa, who had won a VC. He was a hero in our regiment. People talked about him and he was very popular. I remember him as a senior officer.”

Life after the war

When Damar was made redundant in 1947, he returned to Nepal and married a girl he’d known since his youth. After some time farming, he eventually moved to India and spent around 30 years working as a security guard, before retiring back to Nepal at the age of 60. 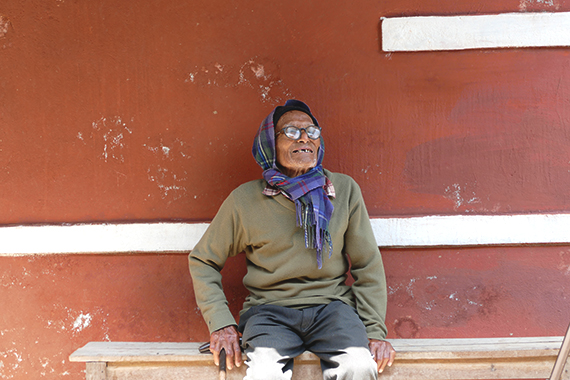 Damar has three sons and three daughters in total. He now lives next door to his second son’s family of nine, who look after him in his old age. The family has some land to grow rice, maize and millet, as well as a few cows.

Damar shares his new home with some of his grandchildren

“With my [Gurkha Welfare Trust] Welfare Pension, this gives us enough food. I also spend some on clothes, or I can give a little to the children.”

“My son often takes me to the [Gurkha Welfare Trust] Centre on his motorbike so that I can see the doctors and get my medication. When I was younger I went to a couple of the medical camps you run.”

When the 2015 earthquakes struck, Damar was at another son’s house in a nearby town.

“I remember everything shaking and everyone running. I also wanted to run but at my age I couldn’t. I just had to sit and wait, watching everyone run outside. I could see the houses cracking. I was scared but what to do? I thought there was nothing to do but sit and wait.”

After the disaster, he stayed with his son in the town for some time and received shelter materials from the Trust. The top floor of his own house had been badly damaged, while part of the house had collapsed.

We completed work on a new home for Damar in January 2017. 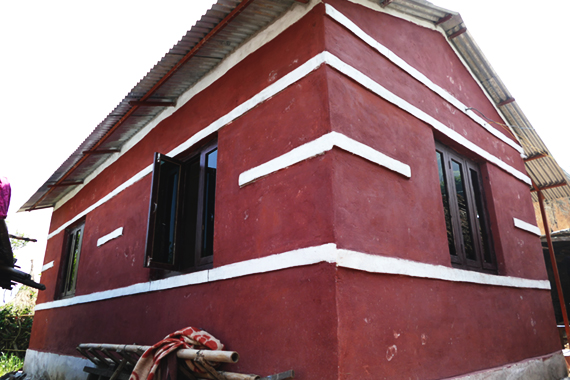 “I’m very happy with the new house. I worked hard for Britain and now they have helped me too. Thank you very much. Without this, we would have to build out of the rubble.”

These days, he leads a tranquil life in the district where the Gurkha story began.

“I like to listen to the news on the television or the radio, although I can’t see very well. I used to like walking but I’m too old now, I can’t go far.”

Above all, Damar likes to rest with his family around him. He tells us that the good thing about old age is not having to do so many chores, but he notes that it would be hard to enjoy without a home.

“I never expected so much support… I’m very happy. Very happy. Thank you.”