Volunteering at a GWT medical camp 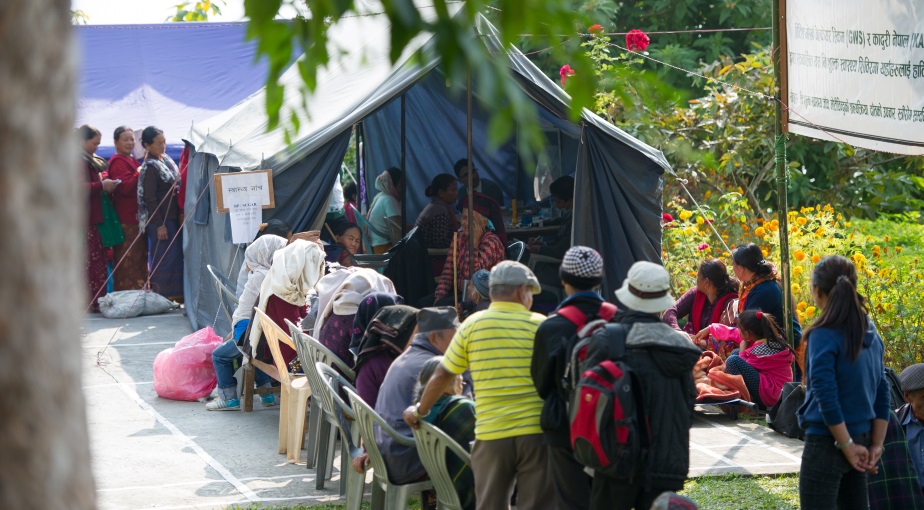 At the GWT, we’re extremely lucky to have so many dedicated supporters. Earlier this year, two of them took the exceptional step of travelling to Nepal to assist at one of our mobile medical camps.Caroline and Gill are both NHS nurses and have been admirers of the GWT’s work for a number of years. In February 2015, they packed their bags and left the lowlands of Berkshire for the majestic foothills of the Himalayas…

Healthcare in the shadow of the mountains

From 2 – 4 March, the pair assisted with a medical camp located at our Patrol Base in Trishuli, a small town north-west of Kathmandu, deep in the hills and a traditional recruitment zone for the Brigade of Gurkhas.

We were very impressed by the amount the GWT does in Nepal, and how they seem to care for not only the Gurkhas and their families but for all Nepalese people.

The Trust runs 8 such camps each year, offering general healthcare and free prescriptions, eye tests and operations, dental care, gynaecology and minor surgery. In this way, we treat around 14,500 people in rural areas where they might otherwise go months or even years without seeking medical attention.

Common complaints at the camps

Over 1,600 citizens attended the camp in Trishuli. The nurses reported that patients suffered from typical third world problems such as a lack of dental hygiene, gynaecological issues among menopausal women and chest infections exacerbated by living with open fires. They told us that the standard of health education among patients was generally limited but that they were all keen to be checked.

State-run healthcare in Nepal is generally underdeveloped and understaffed, particularly in rural areas where there may be as few as one doctor per 100,000 people. This situation has been compounded by the recent earthquakes, which destroyed many rural healthposts. As such, our camps are vital for providing access to medical care.

The medical camps clearly have an enormous impact on the lives of patients.

Whilst at Trishuli, the nurses supported the GPs by seeing patients for procedures such as blood pressure and glucose monitoring. They observed the running of the camp in all aspects and provided feedback on how best to implement UK practices in the field.

So what did Caroline and Gill think of their experience? “We had a great time; the GWT staff in Kathmandu were so friendly and accommodating. They really looked after us well, showed us round and were really keen to show us what work they did and how we could help. We would love to go back and visit one of the Trust’s residential homes!”

Lt Senbahadur Gurung, our Medical Welfare Officer based in Kathmandu, gave a glowing assessment: “Caroline and Gill provided valuable assistance at the various health points and also shared their experience on the effective delivery of healthcare. We’re grateful for their support and confident that they will take back encouraging messages to the UK to assure our donors about the beneficial use of their donations in Nepal as always.

“Overall the medical camp was a great success, thanks to the tireless effort put in by the doctors, their assistants, volunteers and all those involved.”