The oldest Gurkha in Nepal 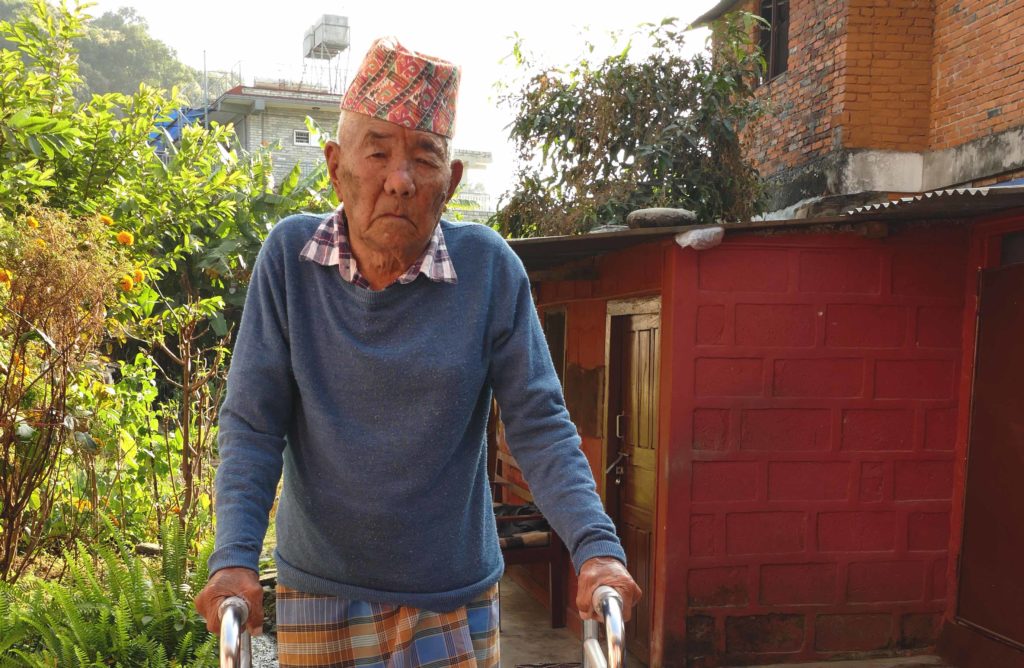 We believe the title of the oldest Gurkha in Nepal belongs to Lance Naik Lal Bahadur Gurung.

Of the 4,500+ Gurkha veterans and widows we support with a Welfare Pension in Nepal, well over 200 of them are over 95 years old. Lal was born in 1914 and celebrated his 105th birthday earlier this month.

The title of our oldest Welfare Pensioner is often up for some debate in our offices. With no official record system dating that far back in Nepal, verifying ages can be near impossible – not to mention the countless Gurkhas who lied about their age to gain entry to the British Army during the throes of World War Two and beyond.

Who is Lal Bahadur Gurung? 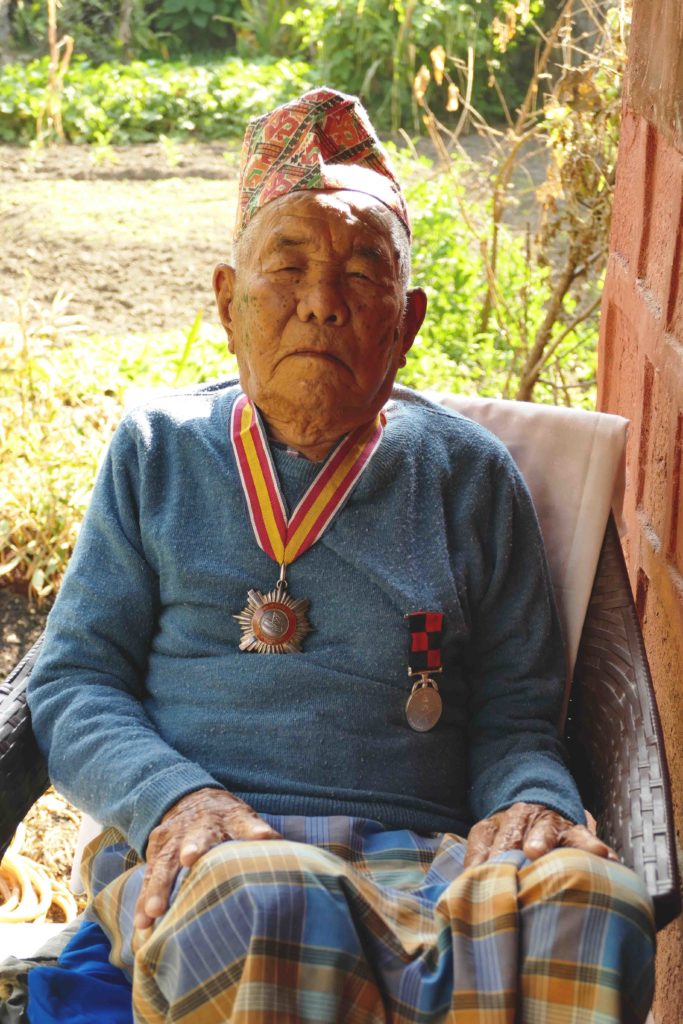 A fiercely proud man, Lal lives just fifteen minutes from our nearest Welfare Centre in Pokhara, Nepal. Though made of just cement blocks and corrugated iron sheeting his home is modern by Nepali standards with good road access, a working toilet, running water and electricity. We met him there recently to discuss his military past and ask him what his secret is for living such a long and fulfilling life.

Lal has seven children in total and since his wife passed away in 2011 he has lived with his second-youngest son and his daughter-in-law. He is very grateful for the care and support they are able to give him in his old age.

Lal still has an incredible memory for his time in the Gurkhas. His enlistment date is recorded as 11 November 1940.

With the world in the throes of a World War, he was one of around 250,000 Nepali men who fought alongside the British. At 26 years old he was over the traditional recruitment age for the Gurkhas but, in need of the numbers, the Army welcomed him. After some brief training he was sent to the front line.

“We went to fight in Libya. Our soldiers suffered a lot over there. Especially us.”

“One time the officers told our section (of eight soldiers) to move forward, and so we started running towards the enemy. They [the officers] didn’t hesitate to send our section. They gave us covering fire from behind with tanks. We had to crawl in places and run in others. We were just bait to lure the enemies close.

“In the chaos, I found myself all alone. I didn’t know where other friends, commanding officers or senior officers went. I didn’t know where to go and what to do at that time. Nobody dared to come where I was. All of them were dead. I then thought to myself that, rather than die later I will live for now. Then I started running. I ran and crawled and ran and crawled.”

Bullets were flying all over

“I found a trench and sat there for some time. Bullets were flying all over. I could see them missing me by inches.”

“Soldiers were injured and they were crying and shouting in pain. I saw another Gurkha, he was from the 6th Gurkha Rifles. I called out to him and asked him what time it was. He said its 12:00 o’clock. I told him to get up. He didn’t say anything. ‘The enemies are coming! shoot at them’ I said. He said don’t fire or the enemies will know our position.

“I started running. When I finally reached the camp they cheered Shabash (Bravo)!

“In the morning I found out that only two of our guys [from my section] returned, including myself. We sat together and cried. We were eight in total when we had begun running […] We suffered a lot.”

From Libya, Lal travelled to Tunisia where he witnessed similar atrocities. He recalls times of walking behind tanks into packed theatres of war and a time when they captured over 800 German soldiers at once and sent them to camps in India. 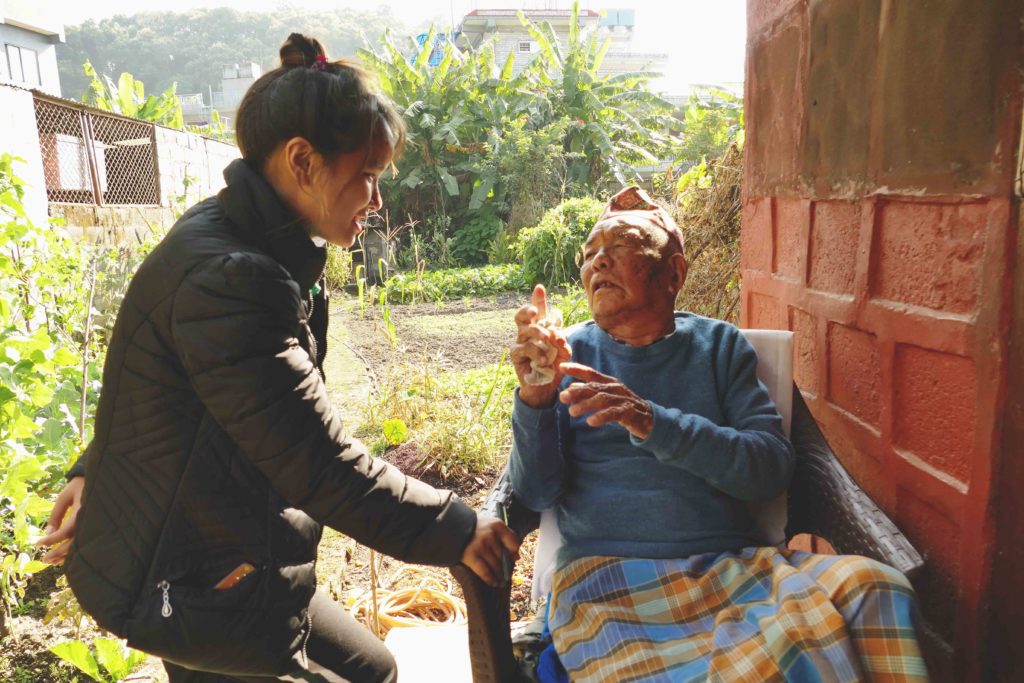 The bravest of the brave

From Tunisia, he was sent to Italy. He recalls tales of Gurkha bravery in the face of almost certain death.

“We were there when the battle occurred in a place called Cassino [also known as the Battle for Rome]. At that time, we didn’t know whether we would live or die. But after eating our meal, we went to the battle singing ‘Khukuri bherera sainli, janu paryo German ko dhawama’ [let’s go and find the Germans with our Kukri] we sang the song to distract the boys from getting worried. If an order was given, we had to follow.”

Life after the Gurkhas

Talking this month, Lal is upset about his treatment by the British Army once the war was finished.

“The British Army enrolled us in their army. They took us to the war, we fought hard and gave our lives. But after the war was over the soldiers were of no use, there were too many soldiers, so they made us redundant. We Gurkhalis won the war but we all were made redundant. If we were not made redundant we could have got our regular service pension. […] We risked our lives for the British”

During his tenure in the Army, he served for seven years across over ten different countries. At the time, fifteen years’ service was required to receive the British Army pension.

Though returning to life in Nepal was difficult, unlike many of his comrades, he was able to forge a living to support him and his family.

“I started a clothes business. I used to buy clothes from Butwal and used to sell it in villages. At that time there were no buses. We had to walk. It took me 5-6 days to reach to Butwal from my village (Hanga, Lamjung). I used to take porters to carry the clothes. I did that business for many years. After that, I started working in the fields. Later, I again opened a shop in the village. I used to sell clothes, slippers etc… as I got older, I left the shop and have come here in Pokhara. I could no longer look after my shop.”

We served the British and now they take care of us

These days he relies on our Welfare Pension to survive. He’s incredibly grateful to the Trust’s supporters for the care he receives.

“I still feel fortunate to have got [The Gurkha Welfare Trust] Welfare Pension. Which is ok for me. We served the British and they are now taking care of us.”

As well as the financial support we’re able to provide him, he also gets regular visits from our medical team to ensure he has the medication he needs.

And the secret to a long life?

“It’s like this. First, I don’t drink, I don’t smoke, I even don’t drink tea. I don’t eat whatever I get given. I drink milk, I sometimes eat meat, I eat lentils. I am aware about diabetes so I don’t eat sugar. I don’t eat too spicy food.

I don’t easily get sick. During the time when I was fighting in Libya I suffered from malaria. I got sick for 15 days. After that I never got sick again.”