The Trust remembers David Clifford MVO this week, who sadly passed away over the weekend.

David was Treasurer of The Gurkha Welfare Trust for seven years, before handing over to his successor at the end of last year. During his time with the Trust he oversaw extensive change in Nepal and the steady growth of our income in the UK through effective fundraising and investment. His contribution was not restricted to just finance but extended to all areas of the Trust’s work and cannot be over emphasised. 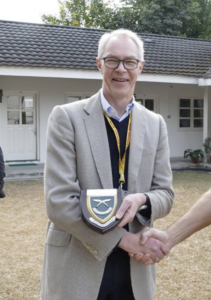 David’s background was very much a financial one. A chartered account and former partner in KPMG for many years, when he retired he took on a number of non-executive directorships and trustee roles. He acted as audit committee chair for a number of these organisations and was also a Trustee of the Varkey Foundation, an international educational charity. In addition he was non-executive Director of Carpetright Plc.

He was made a Member of the Victorian Order (MVO) by Her Majesty the Queen in 2012 for his service as Secretary and Treasurer of the Thames Diamond Jubilee Foundation. The Foundation raised funds for youth charities and also ran the Thames River Pageant, during which 670 boats rowed on the Tideway of the River Thames to celebrate the Diamond Jubilee.

“David was a tremendous asset to the Board of Trustees during his tenure, and was instrumental in ensuring the organisation was able to expand its remit in Nepal whilst remaining on sound financial footing.

He was highly respected and well regarded both here in the UK and in Nepal. He will be sorely missed. Everyone here at the Trust extends their sincere condolences to David’s wife Judie, and his friends and family.”