How a Japanese sword from WWII is helping Gurkha veterans

During World War Two, a medical student volunteered for military service. Little did he know, his experience and a wartime memento would later raise over £1,000 for our work in Nepal. 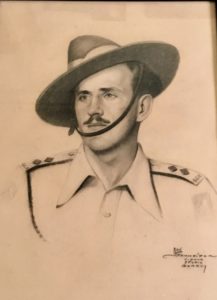 Keen to join the Indian Army, James Brian Rogers, known as Brian by his friends and family, was sent for officer training at the Indian Military Academy in Dehradun. After completing training, Brian was appointed to the Gurkhas, serving with 6th Gurkha Rifles (6GR) during the Burma Campaign.

At the end of the War in the Far East, he was serving as 6GR’s Quartermaster in the rank of Acting Major. When Japan surrendered, their officers piled up their swords as they were disarmed. Along with others from his unit, Brian kept one of the swords as a memento and brought it home with him. The sword he chose was a well-used Japanese katana from the Shinshinto period in 1870.

Returning to the UK, Brian completed his medical degree, working as a doctor and farmer in Worcestershire. He sadly passed away in 2009 but did so leaving the sword to his family.

Earlier this year, Brian’s son, Lt Col Alastair Rogers RM (Retd) sold the sword to a collector for an incredible £1,325 and donated all of the money to us.

“To the end of his life, my father remained intensely proud of the Gurkhas, the time he spent serving with them, and the great friends he made.”

“He would have been absolutely delighted that this money will now be put to good use by the Trust supporting veterans and their families.”

His family, knowing how much the Gurkhas, and work of the Trust meant to Brian, sold the sword at auction earlier this year to a collector. They chose to continue Brian’s support, kindly donating the proceeds towards our work.