Gurkhas and the Scots 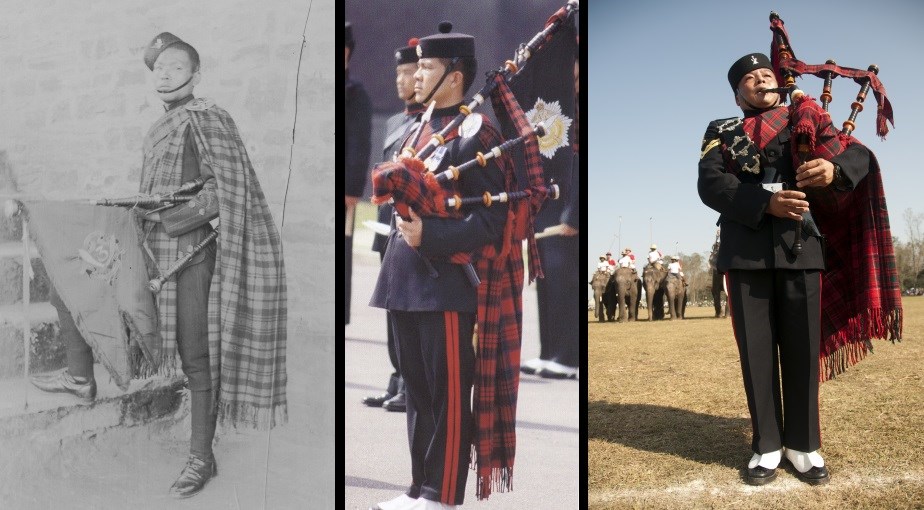 The bonds that exist between Gurkha and Scottish regiments are clear to even a casual observer. It might seem odd to see fighting men from Nepal decked out in tartan and playing the bagpipes, but the history behind this connection runs deep.

Links first developed through the many Scottish officers serving in Gurkha regiments that formed following the Anglo-Nepalese War of 1814-16, in the service of the East India Company.

General Sir David Ochterlony, who commanded part of the East India Company’s invading force in 1815 and who first recommended enlisting Gurkhas, was himself born of Scottish parents.

Over the next 200 years, Gurkha and Scottish troops would fight side by side throughout the world, from Egypt to India, Burma to Bosnia and Malaya to Libya –where soldiers from the 7th Gurkha Rifles and 2nd Camerons were the last to march into captivity at the Fall of Tobruk in 1942. 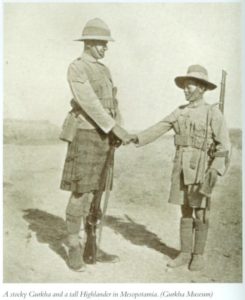 The Gordon Highlanders was formed of units who had fought in the Indian Mutiny of 1857-58, where Gurkhas had proven their loyalty to Britain and played an important role in suppressing the rebellion.

After the same battle, an officer of the 3rd Gurkha Rifles wrote:

“This day was begun the strong feeling of friendship and camaraderie which existed throughout the campaign between ourselves and that splendid regiment, The King’s Own Scottish Borderers. Our men said that they were a pukka pultan (excellent regiment) and they were good enough to return the compliment.”

In the South African War of 1899-1902, the 2nd Gurkha Rifles volunteered, to a man, a day’s pay for the widows and orphans of The Gordons and the 60th Rifles, who had lost many men against the Boer forces. The regiments were later formally affiliated.

During the Second Afghan War of 1878-80, Lord Roberts noted the special ties between the 72nd Highlanders (later the 1st Battalion The Seaforth Highlanders) and the 5th Gurkha Rifles, who stormed Peiwar Kotal together.

In particular, he wrote of an occasion when, after the Gurkhas had lost their kit in an explosion, the Highlanders insisted on giving the Gurkhas their greatcoats for the night –

“A very strong proof of their friendship, for at Kabul in October the nights are bitterly cold”.

Roberts would go on to choose a soldier of the 72nd and a rifleman of the 5th Gurkhas as supporters for his coat of arms.

Even to this day, Gurkha units make the most of their Scottish allegiances by taking part in stalking exercises at private estates in the Highlands. This is an excellent way for them to hone their reputed sharpshooting, tracking and stealth skills, as well as contributing to the local hind cull.

The Trust is fortunate to have many loyal and generous supporters in Scotland, and it remains a popular tourist destination for Gurkhas on leave in the UK.

The wearing of tartan

In 1949 the Cameronians (Scottish Rifles) were affiliated officially with 7th Gurkha Rifles and to mark the occasion the Regiment asked that the 7th Gurkhas should wear their tartan – the Douglas.

The Douglas tartan is worn to this day by soldiers of The Royal Gurkha Rifles and is just one example of Gurkha regiments wearing tartan to honour connections to Scottish comrades.

In 1885, the first Gurkha pipe band was formed and trained by the 2nd Battalion The King’s Own Scottish Borderers.

It was not long before all Gurkha regiments formed their own pipe bands, trained by other Scottish regiments and led by British officers, many of whom were Scots at the turn of the 1900s.

This tradition continues today: the Pipes and Drums form an important part of the celebrated Band of the Brigade of Gurkhas.

Previous Gurkha heroes: then and now 15th January 2020
Next A school in memory of Ed and Siddhanta 13th February 2020
Donate Today