The Gurkha Welfare Trust extends congratulations to Vice Patron Joanna Lumley DBE on her Damehood in the New Years Honours.

Dame Joanna has been honoured for services to ‘drama, entertainment and charitable causes’.

“Joanna’s name is synonymous with the Gurkhas and she is adored by soldiers and our supporters alike. We’re so pleased for this well-deserved recognition and thank her for her ongoing support of our work supporting Gurkha veterans and their families in Nepal.”

As a daughter of the Brigade, the Gurkhas have always held a special place in Joanna’s heart. Joanna’s father Major James Rutherford Lumley served with the 6th Gurkha Rifles during the Second World War. He served alongside two Victoria Cross winners, the late Lachhiman Gurung and the late Tulbahadur Pun, who saved his life in Burma.

Her work with The Gurkha Welfare Trust

Joanna became Vice Patron of the Trust in 2009 and has since visited a number of our projects across Nepal. She campaigned endlessly to promote our emergency appeal following the devastating earthquake in 2015, raising vital funds for those most in need.

Pictured above is Joanna opening Kalika Lower Secondary School, a school we built in Tiplyang located in the Myagdi district of Nepal.

In more recent years she has attended various functions on behalf of the Trust, narrated our first-ever TV appeal and supplied numerous prizes for fundraising raffles and auctions.

When the COVID pandemic began in 2020 she issued a rallying cry to our staff – thanking them for their tireless efforts in difficult conditions and encouraging them on.

“I believe we all owe brave veterans an immense debt of gratitude – for going above and beyond the call of duty to protect our freedom. That is why The Gurkha Welfare Trust will always be a charity immensely close to my heart, allowing me, allowing us all, the chance to give something back, and to help these brave men and their widows live in the dignity they so richly deserve.” 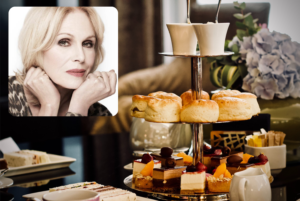 At the end of January we are launching our annual fundraising raffle. This year’s top prize is a once-in-a-lifetime opportunity to not only meet Dame Joanna, but share Afternoon Tea with the esteemed actress, presenter, author and activist at The Ritz in Mayfair, London.

All entries must be made online, and tickets cost £5 each. Tickets are on sale from Friday 28 January 2022 and the closing date for entries is Monday 28 February 2022. The draw will take place on Friday 4 March 2022.

Previous History of the famous Gurkhas: a timeline
Next Where does my donation go? 10th January 2022
Donate Today