The power of the pension

The money we give to thousands of Gurkha veterans, their widows, and families across Nepal is a lifeline. We provide Gurkhas, like Motiras, with a pension each month – enough to cover the essentials they need to survive, such as food, fuel and toiletries. When Motiras was demobbed at the end of World War II, he did not meet the British Army’s requirement of 15 years’ service for a pension at the time. Without your regular support, Motiras, and many like him would struggle to cope.

Rifleman Motiras Gurung was the youngest of three brothers who all fought for the Allies in World War Two. His elder brothers fought in Europe against the Germans, while Motiras was fighting the Japanese in Burma.

He still has a scar from the bullet that pierced his arm during the campaign. His regiment had crossed into the city of Mandalay, held by the Japanese. Supported by fighter planes and tanks, Motiras and his comrades eventually drove the enemy out, but they were still in danger from Japanese raiding parties. One fateful evening, Motiras and his patrol were ambushed, and he felt a searing pain in his arm. He has no memory of what happened next, but he was lucky the bullet hit his arm. A few inches to the left, and it might have killed him.

Amazingly, all three Gurung brothers survived the war and Motiras was eventually discharged. He and his wife now live with his eldest son and his family in Malepatan. At the age of 98, he can still see quite well but is very hard of hearing.

As well as Financial Aid, your monthly gift will help us provide essential healthcare and medication for veterans like Motiras.

When you sign up to a regular gift you will receive a welcome pack containing: 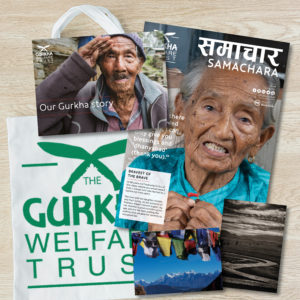 •  A GWT cotton tote bag
•  A welcome book about our work
•  Our latest Samachara newsletter, and ongoing three times per year
•  Two greeting cards
•  A monthly e-newsletter and a quarterly behind-the-scenes email (email opt-in is required).

I want to help repay our debt of honour to courageous Gurkha veterans, their families and communities with a regular gift.

Set up your Direct Debit