No matter how far, we will reach them

With your ongoing support, our Pensioner Support Teams are traveling all over Nepal – reaching out to people in some of the most remote areas of this beautiful but challenging landscape. Particularly those who can no longer make it to our Welfare Centres. Bringing them vital medical support and looking at how we can improve their living conditions.

Elsewhere we are working tirelessly in Nepal to ensure that Gurkha veterans and widows are living with dignity:

Keeping Laxmi and her family safe in the Terai

Since the 2015 earthquake in Nepal, our team has built over 1,000 new homes for Gurkha veterans and widows who lost theirs in the disaster. As a result, we know what’s required to ensure these buildings are sufficiently resilient to future disasters. Laxmi Tamang applied for a new home to be built recently, as part of our pledge to continue to build 100 homes each year for our most vulnerable Gurkha pensioners. We visited her and her family last month to assess her living conditions, to provide a medical check-up and to deliver her monthly Welfare Pension.

Life in the Terai

Of the almost 5,000 Welfare Pensioners we provide for, Laxmi is one of the most remote. Our colleague Sidhartha was surprised at how difficult just reaching Laxmi was:

“Her village is located in one of the most remote parts of the Terai plains in Nepal. I had not imagined there would be such remote villages in the Terai. It took us about five hours (approximately 100km) in a vehicle from our Area Welfare Centre in Chitwan to reach Laxmi’s house. We had to cross the dense jungles of the Chitwan National Park twice and navigate mainly on dirt tracks.” 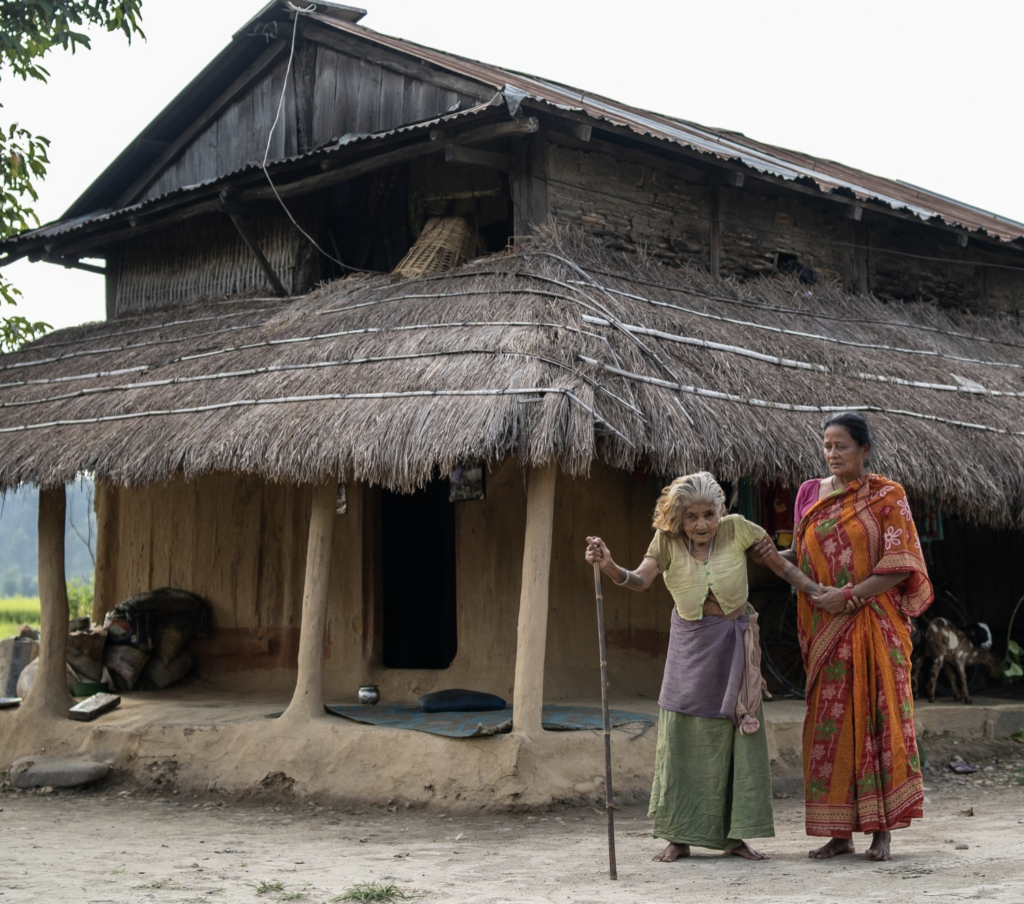 Indeed, Laxmi’s home is so close to the Indian border that, rather than risk a journey through the national park to the nearest Nepali town, Laxmi’s family frequently cross the border to India to buy their necessities. She currently lives in a house made mainly of wood and straw with her grandson Suresh, his wife, his two daughters and their son. With no room for them all, she is forced to share a room with her grandchildren. She is quite frail and needs assistance to move around her home.

Within minutes of arriving at the house, it’s clear to our team that the whole family is dependent on the pension that Laxmi receives. Though her grandson works as a labourer and undertakes some subsistence farming, it’s not enough to sustain their large family.

Laxmi’s late husband, Rifleman Kisnabahadur Tamang, was a World War Two veteran, serving in the 10th Gurkha Rifles. He was released when the British Army downsized at the end of the War.

Laxmi tells us that Kisnabahadur never liked to speak of his time in the War, though the couple were both incredibly grateful for the Welfare Pension that we were able to give them. He sadly passed away just over ten years ago, in 2008.

“[We started receiving the Welfare Pension from The Gurkha Welfare Trust] when my husband was still alive. I don’t know how much it was then but it has helped us a lot. I am fortunate to be still receiving this aid even after he is gone.

“It helps me to buy food for the family and run this house. I cannot see properly. The pension is my lifeline.” “It would be really great to get a new house for me and the family. A proper house would also mean a safe place to stay. We get wild elephants coming into the villages at times so the house would be a safe place.” 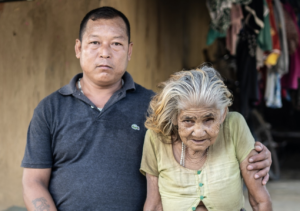 Thanks to your support, work will begin on a new home for Laxmi soon. Though there’s still a long way to go and hundreds of others like her who are desperately in need of a safe space to call home. With your help, we can begin building for them too.

“Someone told me about this aid so I applied and they started to give me the Welfare Pension. Before this we never had money, only the food we could grow. It was a new life. We could actually send our grandchildren to school.”

Our medical camps are open to everyone in the community and are a vital lifeline for many across Nepal who otherwise don’t have access to essential medical assistance.

My grandchildren are my vehicle!

Lachimi Kumri Rai is 93 years-old. Lachmi likes to travel to our Welfare Centre to receive her monthly Welfare Pension. But she doesn’t travel by car…