With monsoon season here, it's vital we can reach out to pensioners in their homes

We were delighted to get some specific training in for some of our female members of the team last month. Over the five-day course, a selection of our staff were taught the basics of motorbike mechanics, how to safely mount and dismount our bikes, and some practical training over difficult terrain. Once our team had mastered the basics they were out on some longer journeys – reflective of the kind of drives they will be taking to reach our most vulnerable pensioners in remote villages of Nepal.

We're headed into Monsoon season in Nepal now which is always a challenge, not just for the team but also for some of our more vulnerable pensioners who are at risk of landslides and floods. It's more important than ever that we continue to reach them in their homes to ensure they have everything they need in order to live a life of dignity.

With your ongoing support, our team will continue battling the elements to bring aid to those who need it most.

Major (Retired) Yam Kumar Gurung is our Head of Individual Aid. He previously served with the Queen’s Gurkha Signals and was also previously an Area Welfare Officer in Tanahun in central Nepal.

Major Gurung is a second generation Gurkha – his father, Tekbahadur, severed in the same regiment before him. Enlisted in 1950 he saw service as a Radio Operator in India, Malaya, Borneo, Germany and the UK. He served for 20 years before retiring in 1970. Yam remember his father’s words re. his time in the Army: 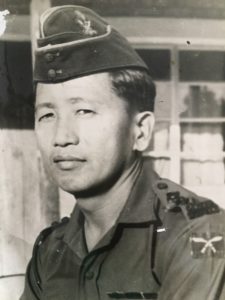 ‘I was illiterate when I joined the Army. There was no school in the village and no one could afford to send their children’. ‘In order to get to my rank, I had to work hard.”

Yam himself joined the Gurkhas in February 1983 and had a distinguished career spanning 30 years. During which he served in Hong Kong, Brunei, Saudi Arabia, Bosnia, Kosovo and Sierra Leone. He retired as a Major in June 2013.

The 2015 earthquake and joining GWT

“I was on leave with my family in Nepal (Kathmandu) when the monstrous earthquake struck. I didn’t think of anything but to join the GWT so that I could help those pensioners who were affected. I always wanted to join the GWT to help our elderly pensioners.

Both of my parents (ex pensioners) are not alive now. Both passed away while I was still in service. I couldn’t be with them when they were old and sick because of my job abroad. This job gives me full of job satisfaction. I see these elderly pensioners no different to my own parents.”

On March 20 and 21, many Gurkha veterans and families celebrated the Hindu festival of colours known as Holi. Celebrations took place in their homes, in our Welfare Centres and at our Residential Homes. The festival celebrates fertility, colour, and love, as well as the triumph of good versus evil.

Though we now visit many of our Gurkha veterans and widows at their homes to provide aid, some still like to make the trip to our Welfare Centres to catch up with old comrades. The gifts of jackets and hats as the Winter Allowance this year continue to be well received.

We recently partnered with Team Rubicon to deliver emergency response training to our staff across Nepal. With over 450 staff spread across 21 offices in Nepal, we’re well placed to respond should disaster strike and so it’s of paramount importance that our staff are equipped with the right tools and the knowledge to help.

In partnership with Kadoorie Agriculutral Aid Association, we provide free medical camps for communities living in the remote hills of Nepal. For many, this is the only medical assistance they receive. Relatively simple procedures like cataract removals and tooth extractions can make all the difference to those living in discomfort.

At the beginning of this year we hosted our 100th medical camp and in May, our 101st.