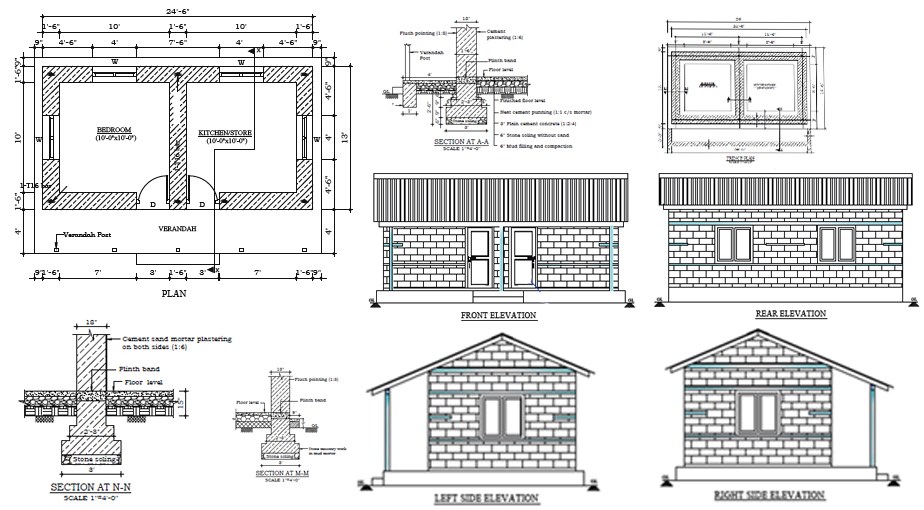 Nearly 1,200 Gurkha homes were among those destroyed in the earthquakes this time last year. A further 1,000 Gurkha veterans or widows suffered damage, leaving them vulnerable to future collapse.

We are currently rebuilding all of the 1,200 destroyed homes and funding repairs to the 1,000 with damages. Exactly one year on, some of our pensioners have been kind enough to share their experiences of the earthquakes and their thoughts on their new homes. 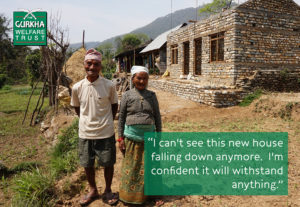 75-year-old Corporal Krishnabahadur Thapa served with the 2nd Gurkha Rifles from 1959. As a younger man he fought in Brunei and Borneo – jungle based conflicts where Gurkhas provided the lion’s share of the British Army’s role.

Talking of his service, Krishnabahadur recalls: “[I remember] gunfire and bullets whizzing over our heads. I felt then that we would probably all be killed.”

Fortunately, he survived the battles and eventually returned to a hard but peaceful life of subsistence farming in Parbat district, Nepal.

When last year’s earthquake struck, Krishnabahadur initially thought a heavy lorry was causing the ground to shake, but the horrifying truth soon became clear. His home was destroyed and he spent the following weeks in a tent with his family.

Now, after months of hardship in temporary shelters, Krishnabahadur is only days away from moving in to his new home with his wife, Belkumari. For the couple, it will be a relief to have a secure roof over their heads. Krishnabahadur added with a smile:

“I can’t see this new house falling down anymore. I’m confident it will withstand anything.

“To all who helped us and the good people who have made this possible for us, I say thank you from the bottom of my heart. I will remember your kindness for as long as there is breath in my body.” 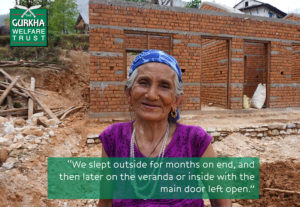 Pabitra Rana is the widow of the late Gurkha Rifleman Tilakbahadur Rana, who served with the 2nd Gurkha Rifles. Before returning to Nepal, Pabitra lived with her husband in Brunei.

Speaking about the earthquake, she said: “Everything shook; everyone had gathered on the hill at the temple and my youngest granddaughter apparently cried when she didn’t see me there.

“We slept outside for months on end, and then later on the veranda or inside with the main door left open. I went to the [Gurkha Welfare Trust] Welfare Centre myself to apply for aid.”

As well as providing temporary accommodation, we were able to rebuild Pabitra’s house in our new earthquake-proof design. Last week she became one of our first Welfare Pensioners to move into her new house. She is delighted with the results.

“If it wasn’t for GWT, we’d have to make do by living in temporary huts. My wish is to live as long as possible so I can reside in this nice house for a long time, but unfortunately I am suffering from ill health. I’d like to say thank you to those who have helped us. May they prosper wherever they may be or go. And with your blessings, may I also get to live a long life so I can live in this house for many years.” 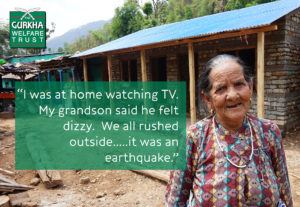 Indrakala Khadka is one of our Welfare Pensioners in Nepal, receiving a small grant from the Trust every quarter. She is the widow of Gurkha Rifleman Dirgabahadur Khadka ex-6th Gurkha Rifles.

Indraka was at home when the earthquake struck. Her Grandson was out working in their paddy field. When he returned he was shocked at what he found:

“I was struck by the devastation all around in the village. Collapsed houses, goats and oxen trapped underneath fallen masonry and so on.  The upper floor of our house had collapsed. We remained outside and slept in tents.”

We have since assisted the family in rebuilding their home, using our quake-proof design. Indrakala expressed to us just how grateful she is to Trust supporters for funding her new home.

“If we hadn’t received this aid we’d not be able to survive. We wouldn’t be able to live in the house we’re about to live in. We might at most carry out some repairs to our damaged house, but it would most probably collapse again. This house is solid and firm.

“We would like to say thank you to all our benefactors and may their lives always progress with success and prosperity.”