A week in the field at the top of the world 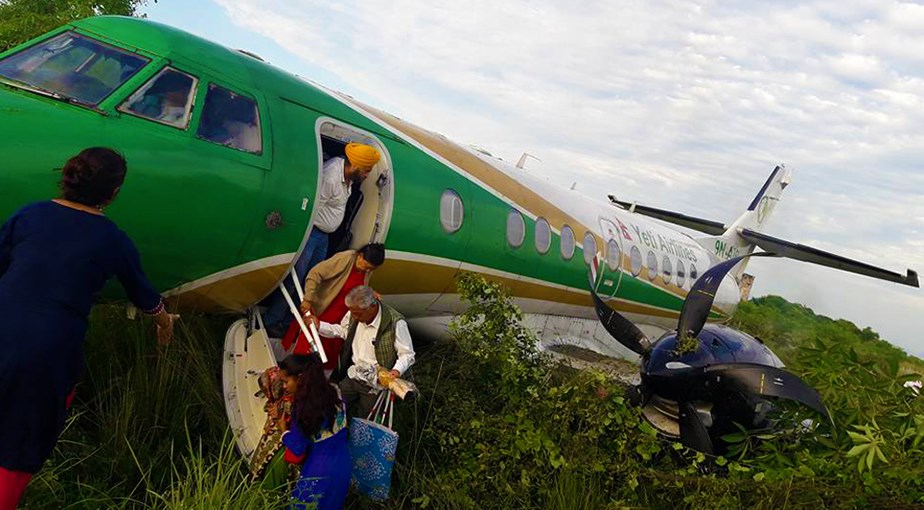 Want to know what it’s like to work in the one of the most extreme environments on earth?

Last month, former engineer and Head of our Earthquake Response Team, John White, headed out to visit some of our most remote projects in eastern Nepal. In this light-hearted account, John’s diary from the trip gives supporters a behind-the-scenes glimpse of our work…

“An early start to catch the first flight out of Pokhara to Kathmandu but was rewarded with a stunning view of Annapurna and Macchapuchhre as we lifted into a clear December sky. It was a bit of a bumpy arrival in Kathmandu (see above) but, as they say in the Fleet Air Arm, ‘any landing you walk away from is a good one!’

We transferred to one of the Trust’s Land Rovers in Kathmandu for a 7-hour drive up to our Area Welfare Centre (AWC) in Jiri. The roads are still bearing some damage from this year’s monsoon but we arrived in time to be welcomed for supper and an update from Shyam Kumar Rai, our welfare officer in this, the highest of our 22 AWCs. 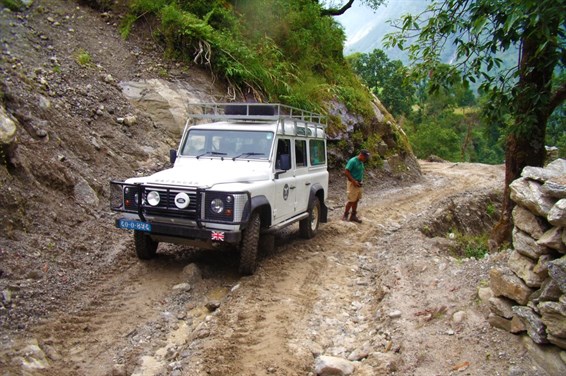 The roads are still bearing some damage

Jiri was hit hard in the 2015 earthquake and the welfare centre collapsed, forcing our staff to operate out of tents for two months. It was rebuilt by the Queen’s Gurkha Engineers who deployed a squadron from the UK to assist in the immediate aftermath. 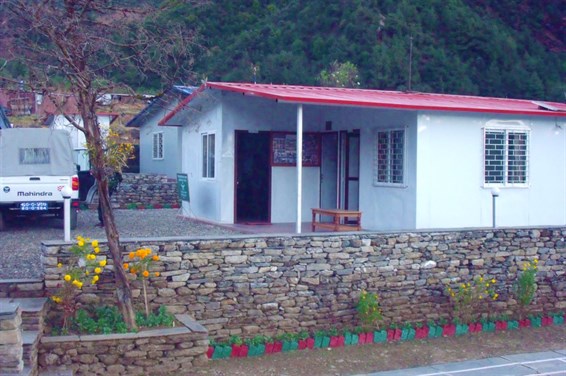 The rebuilt welfare centre at Jiri

Early start (it’s always an early start on field trips!) and we headed out to neighbouring Ramechhap district, joining up with an MOD duty trekker who was visiting Nepal for the first time. These duty trekkers are a great help to the GWT, helping stretched staff to contact our pensioners in some of the more remote areas. First stop was to see Tshering Sherpa, a spritely 90-year-old whose home was rebuilt in the summer by those fine men of the Queen’s Gurkha Engineers. 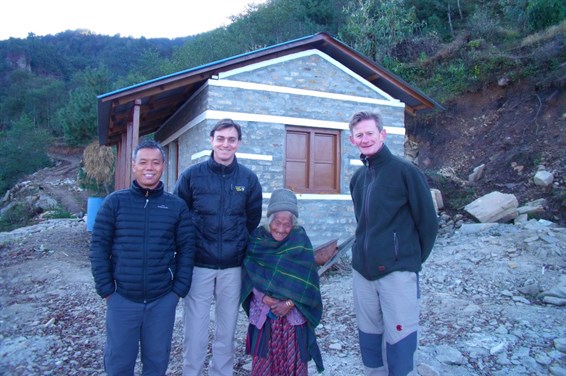 With Tshering Sherpa outside her new home. She plans to walk 5 hours to Jiri next week to collect her pension!

Then it was on with our packs and uphill (always uphill!) to meet Dilbahadur Thapa, whose house was rebuilt with funds donated by his old regimental association, the Queen’s Gurkha Signals in conjunction with The Worshipful Company of Dyers.

The final haul of the day had us ‘topping out’ at a chilly 2,550m where we pitched our tents and were able to sleep soundly knowing that the North Star appeared to be in more or less the right place. Slumber was assisted by bottle of local raksi (which mysteriously found its way on to the evening menu… life doesn’t get better than this!). 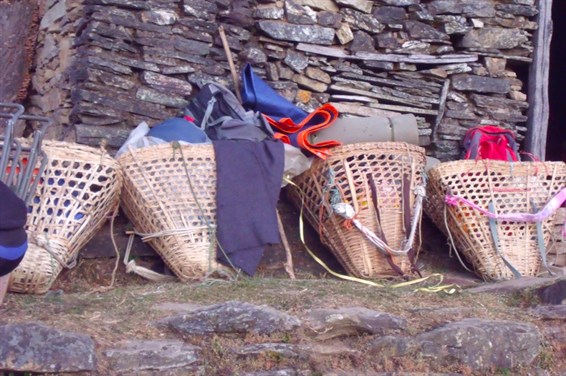 A few basic necessities for our walk in the hills

The first few hours started with a downhill stretch (like seriously downhill) which reduced our knee joints to sawdust and had us begging for more uphill – we were not to be disappointed. On the way, Shyam Kumar took us past the home build of another pensioner and was able to hand out a further instalment of the reconstruction grant. He only just started building two weeks ago but already the walls are above the lintel level – I estimate he will have moved in by mid-January. 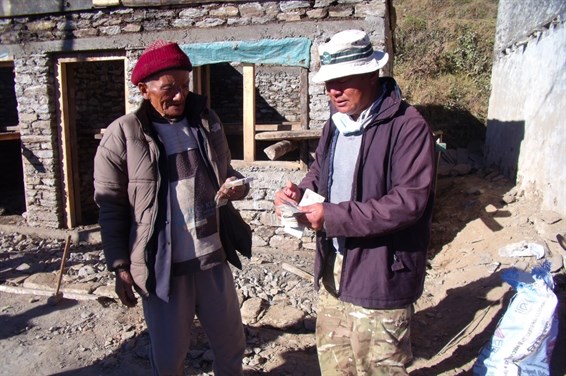 The reconstruction grant, provided by our generous supporters, is distributed in 3 instalments. The GWT checks the standard of construction at each stage

Lunch was at the site of a school we helped out last year after it was flattened in the earthquake. Thank goodness the earthquake struck on a Saturday and there were no children there at the time. The head teacher (who walks for 1½ hours every day to work) insisted on lunch, courtesy of the school’s award-winning catering department(!). Why is it that school dinners are the same the world over?

All our projects have a sponsor and for this project it was Driver Hombahadur Sunuwar of the Gurkha Transport Regiment. Himself a victim of the earthquake (we are helping him rebuild his shattered home) he told us that when he joined the Gurkhas, he walked for 5 days to Paklihawa on the Indian border, took a train to Calcutta then boarded a troop ship to Singapore before a 5-day truck journey to the training depot at Sungei Patani in Malaya. In total, 20 days from village to billet – a far cry from today’s successful recruits who are flown directly from Kathmandu to Manchester before a short journey to Catterick. 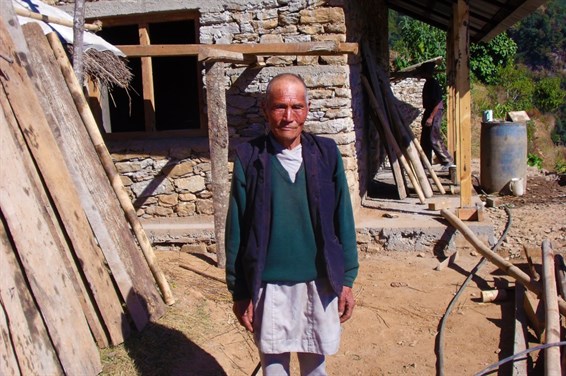 Our night stop was at Dande astride the torrent that is the Likhu Khola river. A couple of years back, the GWT completed a water project here – we build or repair 120 such projects each year in remote communities. Living next to a river is one thing but having a safe, reliable source is something else. 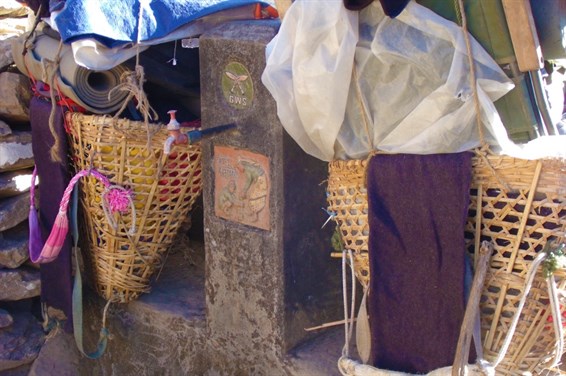 Crossed into Okhaldhunga at which point our escort of duty trekkers went their separate way… and took their porters with them. Now carrying just a small pack I met up with my Project Supervisor – Bhakta – from the neighbouring AWC at Rumjatar and one of the centre’s orderlies whose title barely does justice the wide range of tasks they take on from guide, to translator to occasional porter. 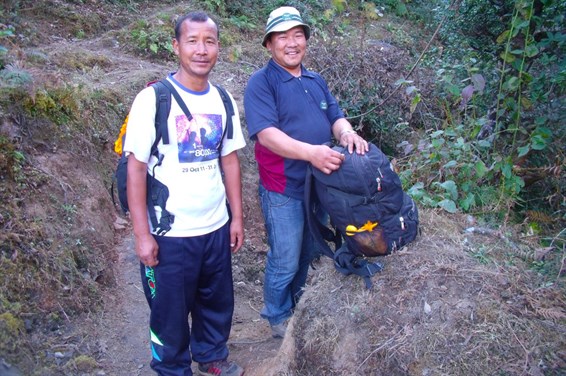 Project Supervisor Bhakta and GWT orderly Langimar from AWC Rumjatar relishing the thought of the peaks we would conquer in the next 48 hours!

En route, we stopped to see a trail bridge being built by the GWT’s partner in Nepal, the Kadoorie Agricultural Aid Association (KAAA). This charity has been running almost as long as the GWT but concentrates on building bridges, micro-hydro schemes and drinking water in the more remote areas. Very much a part of the team helping our pensioners and their communities, it was good to see an example of their work. 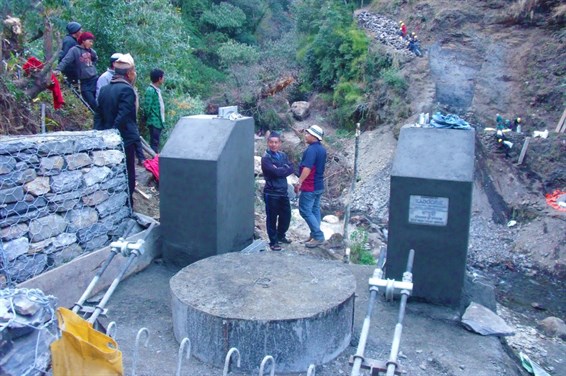 We spent that evening at the home of the bridge’s project sponsor. Corporal Krishna Bahadur Tamang served in the Queen’s Gurkha Signals from 1959 to 1961. He took part in jungle operations in Serambang, Malaya and proudly told me that he could send Morse code at 15 words per minute. Later he joined the Gurkha Parachute Company under the legendary Lieutenant Colonel John Cross (now 92 and living in Pokhara) and was one of a detachment of Gurkhas stationed briefly in Tidworth in the early 60s. During this time he was on guard at Buckingham Palace and visited the Clifton Suspension Bridge. 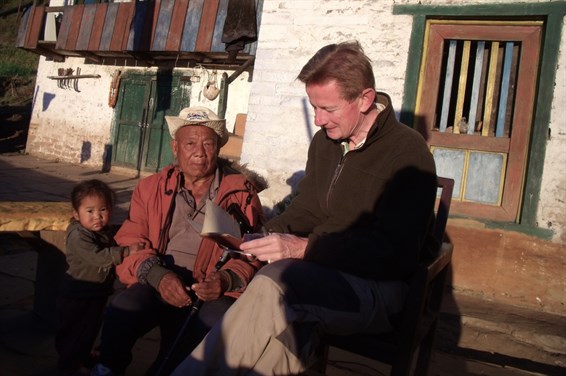 No rest for the wicked but up with the larks and another fast march towards the east. We took a quick diversion so that Bhakta could check progress on another house being built. He is currently managing about 10 different house builds, each requiring to be visited once every 10 days or so and some of these visits requiring 2-3 days travelling… all by foot! 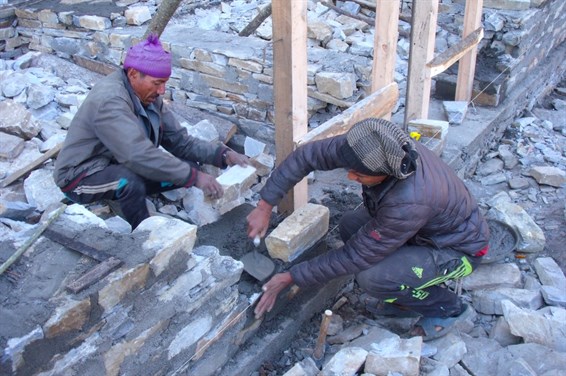 Some good quality stonework by the ‘mistris’ (craftsmen) on this house

And as people in England lay in bed, we descended a ‘cliff path’ (= cliff, forget about the path!), crossed another river, climbed another Himalaya then persuaded a bloke with a jeep to take us the remaining 10 miles to Rumjatar for the princely sum of 400 rupees (about £3.00). Rumjatar has to be among the prettiest villages in Nepal and our welfare centre there is a real haven for the weary traveller… and they just happen to serve Tongba, the millet based locally brewed beer – a good way to relax after several days of trekking. 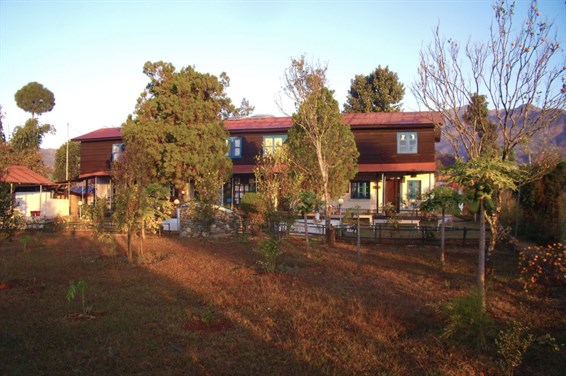 Our Area Welfare Centre in Rumjatar

Pension paying day at Rumjatar. We pay our Welfare Pensioners quarterly and in December they receive an additional Winter Fuel Allowance. This year, we also had a number of blankets donated by KAAA (thank you, Kadoorie) which we handed out to the oldest of our pensioners. When there weren’t enough to go around, we sent the ever willing Langimar into the bazaar to top up the supplies – it gets nippy up there in the winter and we didn’t relish the thought of some of our more vulnerable pensioners going home empty handed. 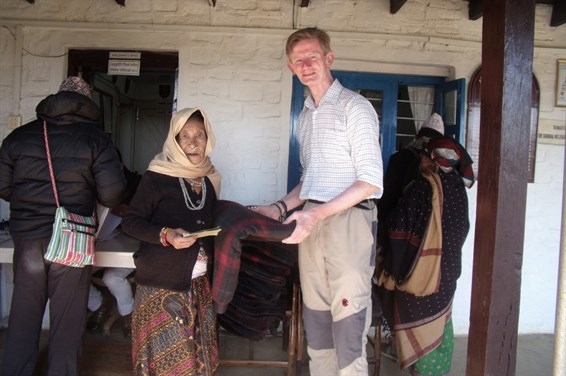 I was persuaded by Bhakta to come and look at one more house he was building. In response to the perennial question, ‘How far?’ and the predictable response, ‘Not far’, we arrived four hours later at the home of the widowed Mrs Laxmi Devi Rai. We are just setting out this house and her son-in-law has come up from Dharan in the east to manage the build. On the way back to the welfare centre, we took another diversion to see a few more of Bhakta’s masterpieces and meet the teams building them. 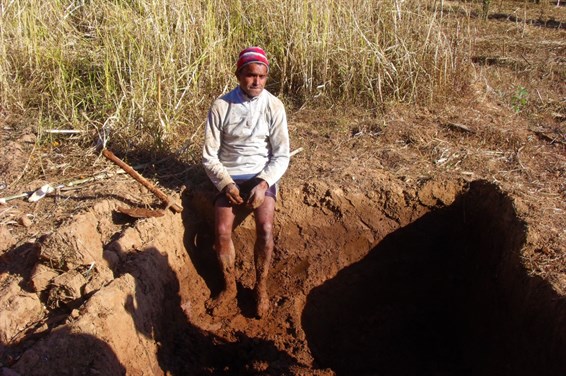 Despite the 5am start, the staff of the welfare centre turned out en masse to see me off, claiming that they always get up at that hour. How lucky we are in the GWT to have such a dedicated collection of welfare officers and staff. They really care about their ‘charges’ and many will literally spend days away from the welfare centre in order to track down and ensure that no single pensioner is neglected.

Then with some last-minute throat clearing, ensuring that all passengers were safely strapped in and checking that the not-at-all-repetitive Nepali music was on at full volume, we pointed our bows towards Kathmandu and bumped along the dusty road for the next 11 hours, pausing only briefly for comfort breaks. 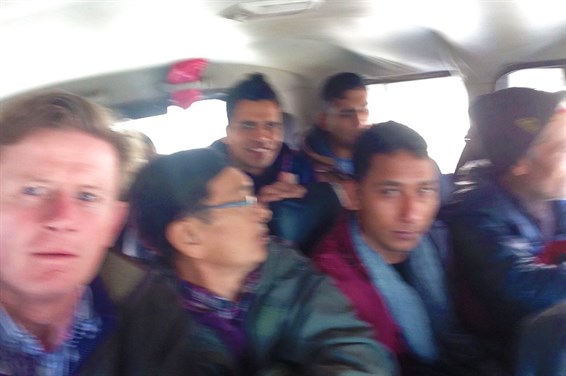 An intimate journey back to Kathmandu! Bumpy roads make for blurry photos…

Bruised, battered but unbowed, and after a dream-free slumber in the comfort of our welfare centre in Kathmandu, time to catch the flight back to Pokhara, flick through my notes, answer a few dozen emails and push out the lessons learned over the last 7 days in Jiri and Rumjatar to all the other centres across the country. By lunchtime, the previous day’s journey was forgotten and I am already planning my next trip – probably to remote Dhading in early January. That will take off any excesses gained over the Christmas period…

A very Happy New Year and thank you to all our supporters!”

Disclaimer: Please note, the views expressed in this article are those of the individual staff member, rather than the Trust as a whole.

Check out a recent video of John giving an update on our earthquake response progress at a school build in Nepal: