50 years in Nepal: Our original appeal

Below is our original appeal literature, with a foreword from Field Marshal The Lord Harding of Petherton.

All facts accurate as of 1969. Click on the images to enlarge. 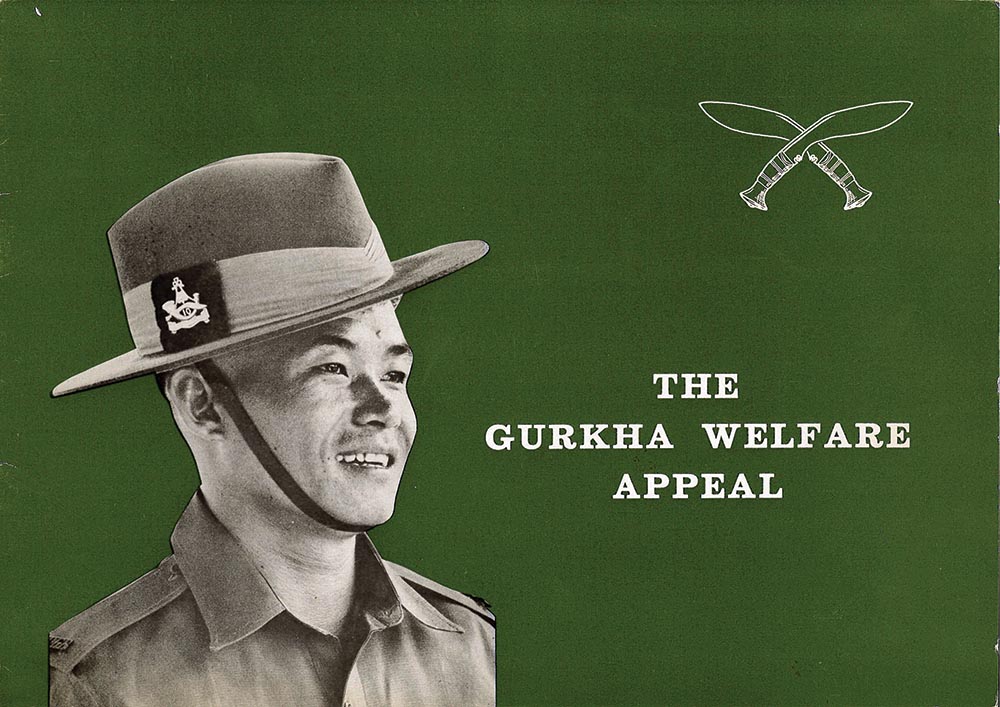 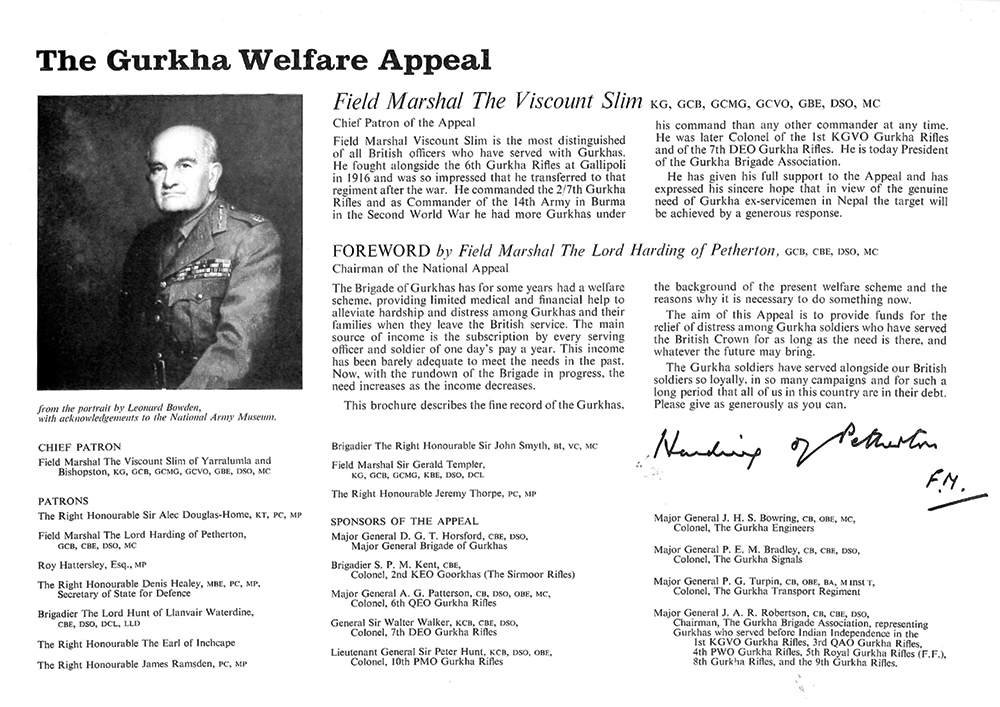 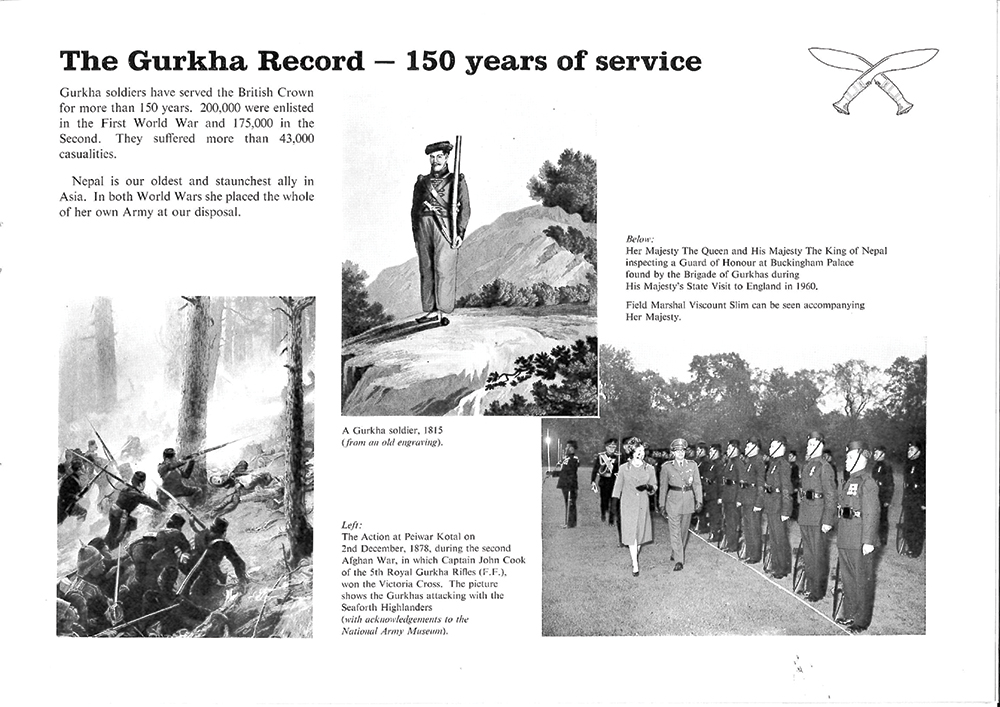 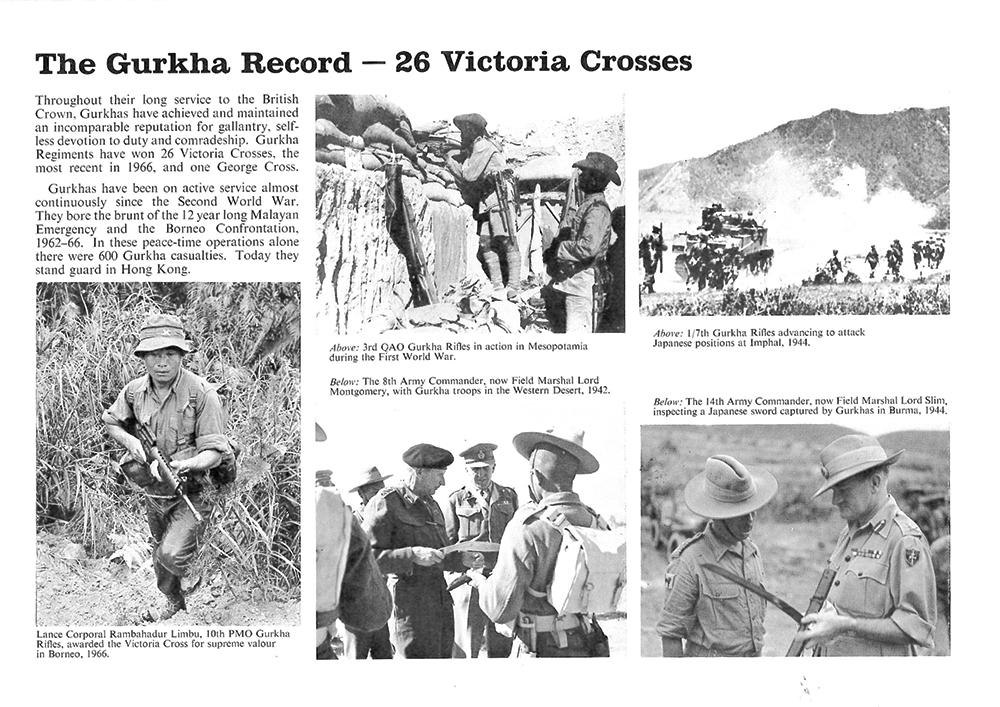 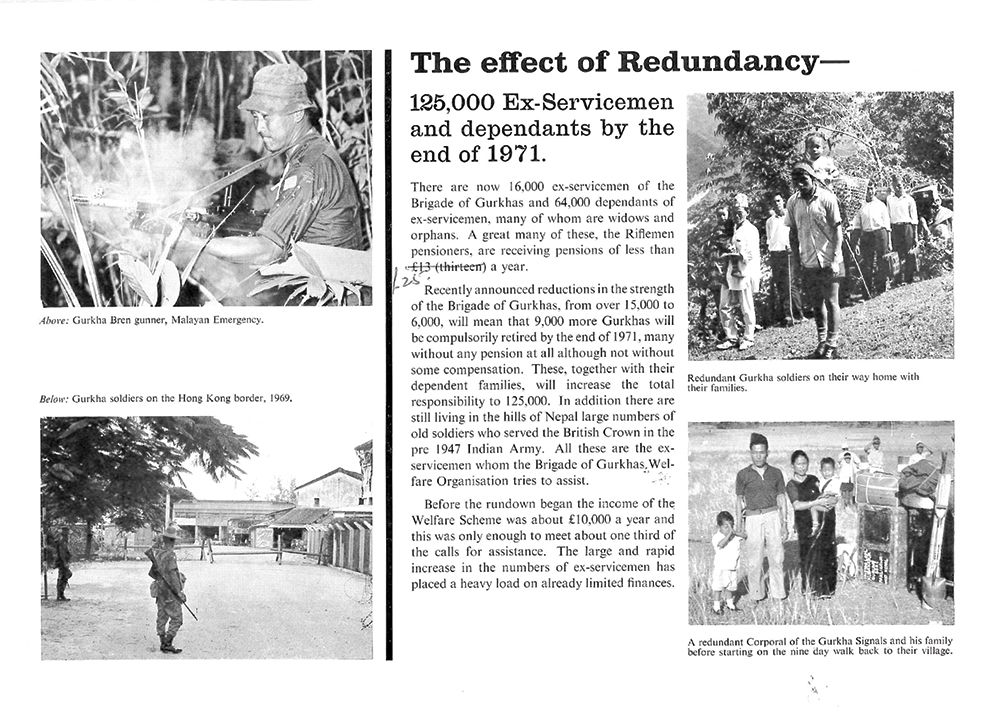 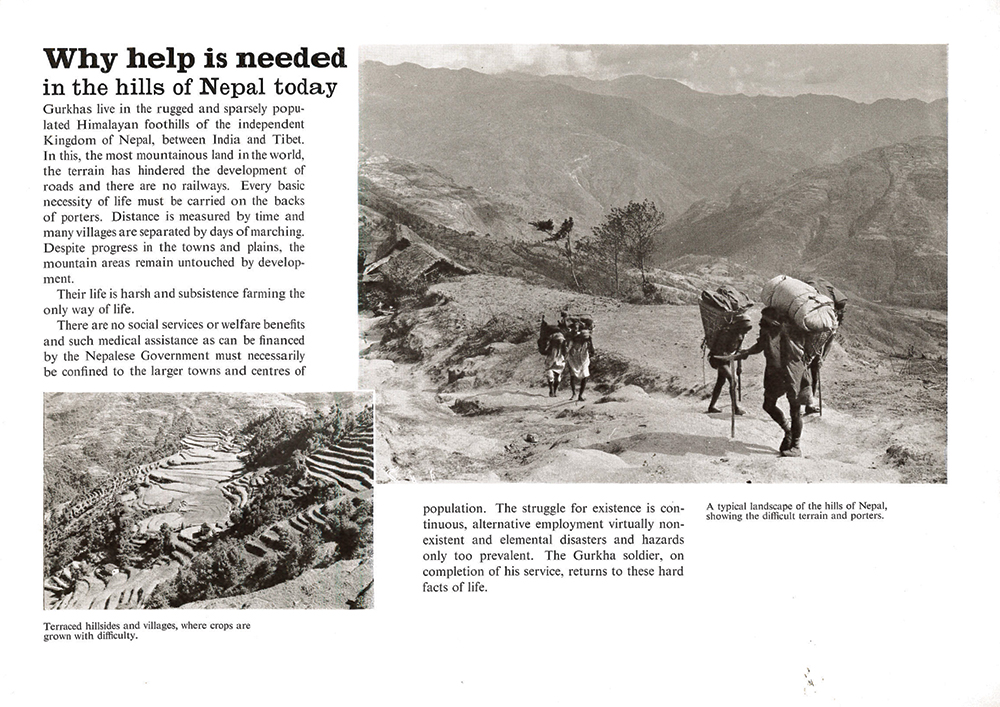 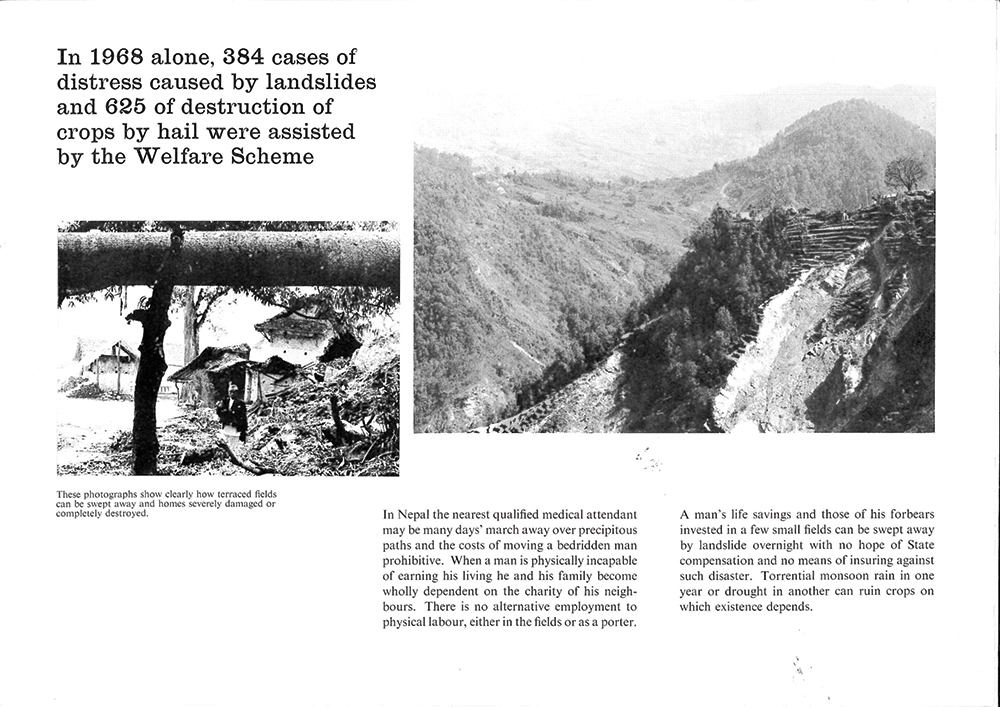 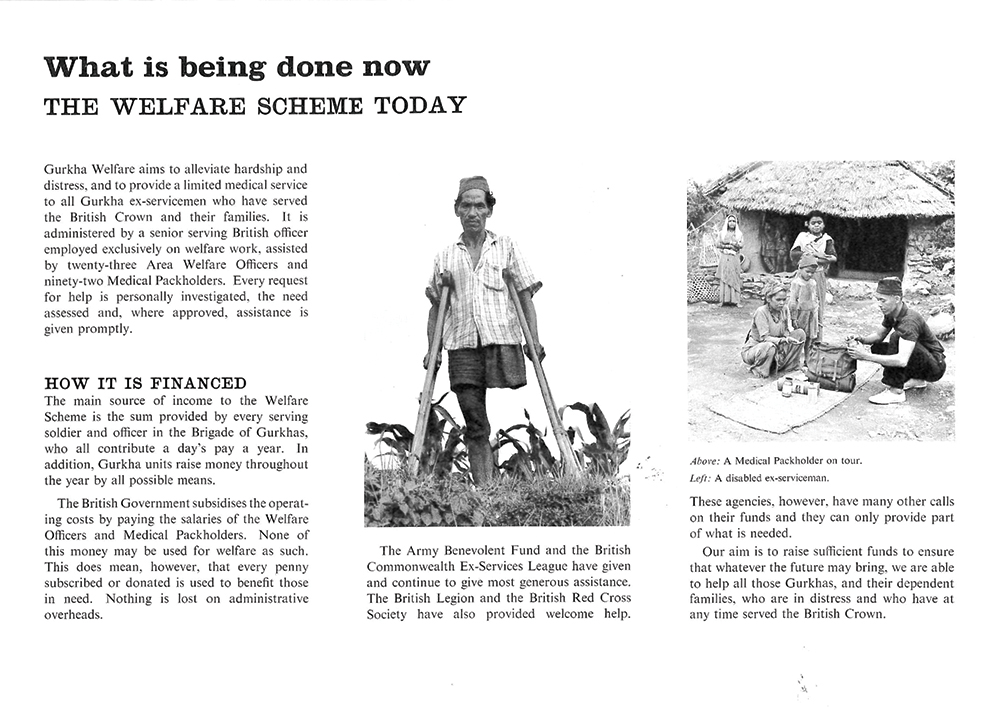 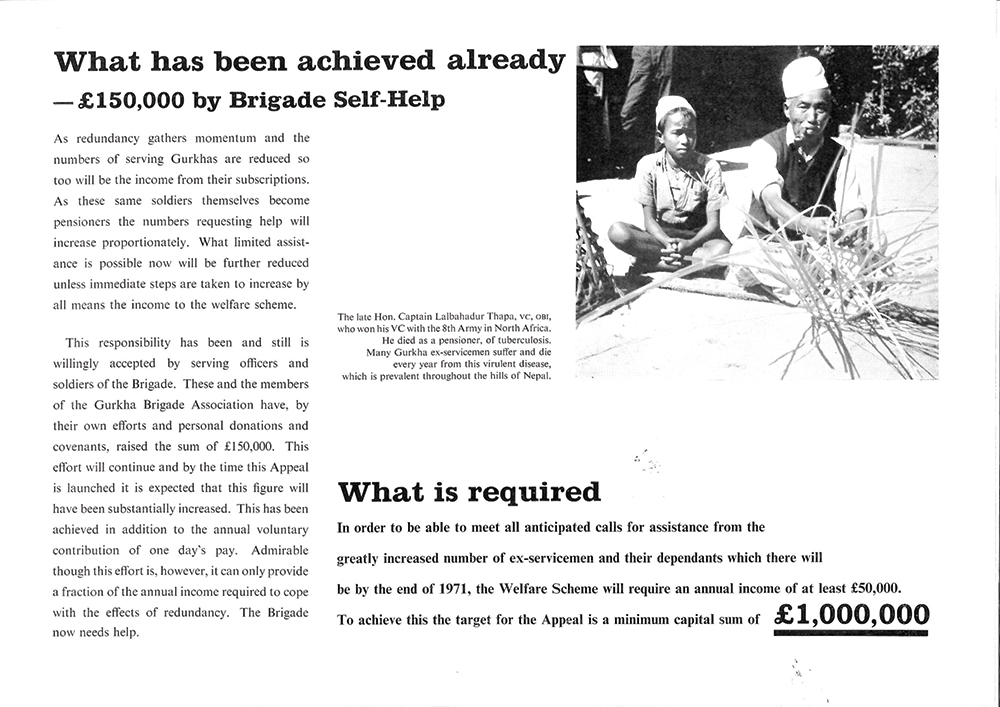 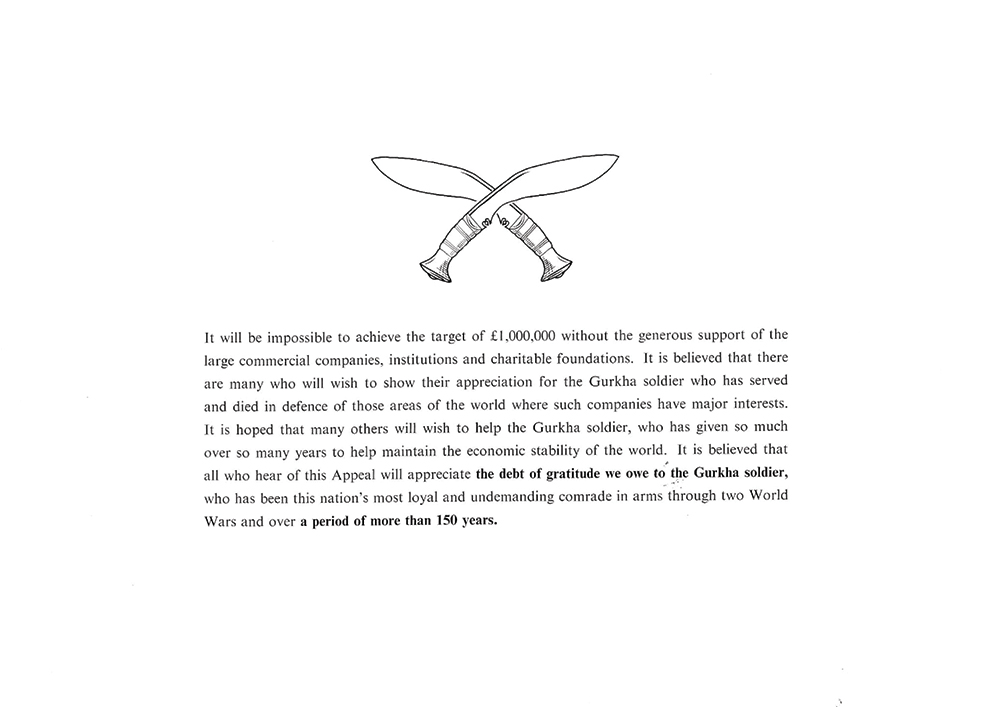 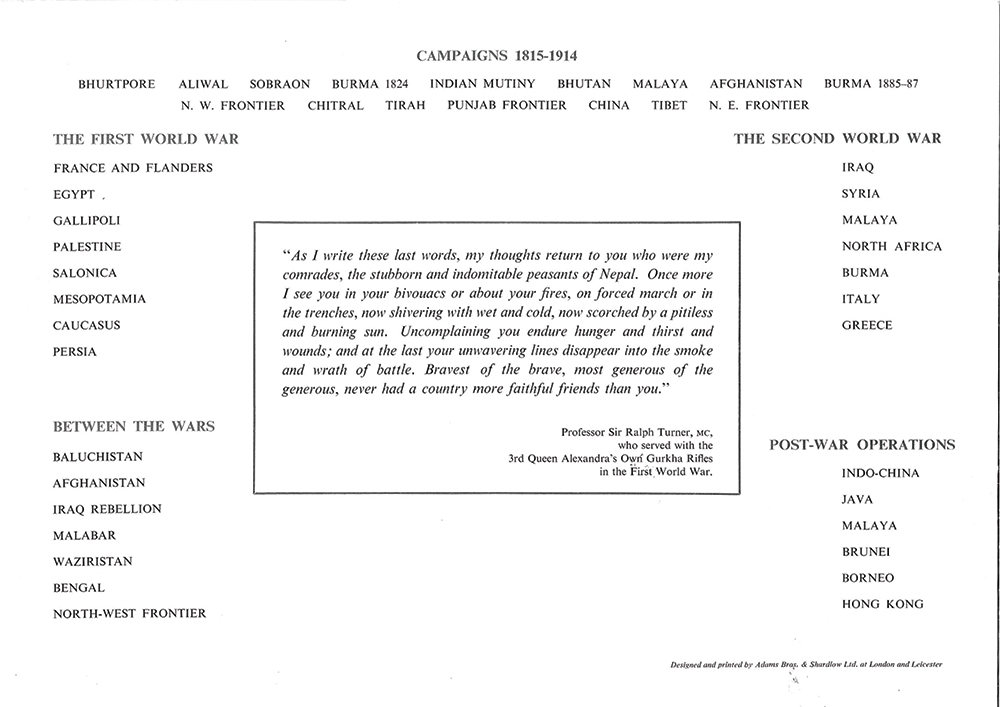 Find out more about our 50th anniversary here

Field Marshal Viscount Slim is the most distinguished of all British officers who have served with Gurkhas. He fought alongside the 6th Gurkha Rifles at Gallipoli in 1916 and was so impressed that he transferred to that regiment after the war. He commanded the 2/7th Gurkha Rifles and as Commander of the 14th Army in Burma in the Second World War, he had more Gurkhas under his command than any other commander at any time. He was later Colonel of the 1st KGVO Gurkha Rifles and of the 7th DEO Gurkha Rifles. He is today President of the Gurkha Brigade Association. He has given his full support to the Appeal and has expressed his sincere hope that in view of the genuine need of Gurkha ex-servicemen in Nepal the target will be achieved by a generous response.

The Brigade of Gurkhas has for some years had a welfare scheme, providing limited medical and financial help to alleviate hardship and distress among Gurkhas and their families when they leave the British service. The main source of income is the subscription by every serving officer and soldier of one day’s pay a year. This income has been barely adequate to meet the needs in the past. Now, with the rundown of the Brigade in progress, the need increases as the income decreases.

This brochure describes the fine record of the Gurkhas, the background of the present welfare scheme and the reasons why it is necessary to do something now. The aim of this Appeal is to provide funds for the relief of distress among Gurkha soldiers who have served the British Crown for as long as the need is there, and whatever the future may bring. The Gurkha soldiers have served alongside our British soldiers so loyally, in so many campaigns and for such a long period that all of us in this country are in their debt. Please give as generously as you can.

Gurkha soldiers have served the British Crown for more than 150 years. 200,000 were enlisted in the First World War and 175,000 in the Second. They suffered more than 43,000 casualties. Nepal is our oldest and staunchest ally in Asia. In both World Wars she placed the whole of her own Army at our disposal.

Throughout their long service to the British Crown, Gurkhas have achieved and maintained an incomparable reputation for gallantry, self­less devotion to duty and comradeship. Gurkha Regiments have won 26 Victoria Crosses, the most recent in J 966, and one George Cross.

Gurkhas have been on active service almost continuously since the Second World War. They bore the brunt of the 12 year old Malayan Emergency and the Borneo Confrontation, 1962-66. In these peace-time operations alone there were 600 Gurkha casualties. Today they stand guard in Hong Kong.

Page 4: The effect of redundancy

125,000 Ex-Servicemen and dependants by the end of 1971. There are now 16,000 ex-servicemen of the Brigade of Gurkhas and 64,000 dependants of ex-servicemen, many of whom are widows and orphans. A great many of these, the Riflemen pensioners, are receiving pensions of less than £25 a year.

Recently announced reductions in the strength of the Brigade of Gurkhas, from over 15,000 to 6,000, will mean that 9,000 more Gurkhas will be compulsorily retired by the end of 1971, many without any pension at all although not without some compensation. These, together with their dependent families, will increase the total responsibility to 125,000. In addition, there are still living in the hills of Nepal large numbers of old soldiers who served the British Crown in the pre-1947 Indian Army. All these are the ex­servicemen whom the Brigade of Gurkhas, Welfare Organisation tries to assist. Before the rundown began the income of the! Welfare Scheme was about £10,000 a year and this was only enough to meet about one-third of the calls for assistance. The large and rapid increase in the numbers of ex-servicemen has placed a heavy load on already limited finances.

Page 5: Why help is needed in the hills of Nepal today

Gurkhas live in the rugged and sparsely populated Himalayan foothills of the independent Kingdom of Nepal, between India and Tibet. In this, the most mountainous land in the world, the terrain has hindered the development of roads and there are no railways. Every basic necessity of life must be carried on the backs of porters. Distance is measured by time and many villages are separated by days of marching. Despite progress in the towns and plains, the mountain areas remain untouched by develop­ment. Their life is harsh and subsistence farming the only way of life. There are no social services or welfare benefits and such medical assistance as can be financed by the Nepalese Government must necessarily be confined to the larger towns and centres of population. The struggle for existence is con­tinuous, alternative employment virtually non­existent and elemental disasters and hazards only too prevalent. The Gurkha soldier, on completion of his service, returns to these hard facts of life.

Page 6: Why help is needed in the hills of Nepal today (continued)

In Nepal the nearest qualified medical attendant may be many days’ march away over precipitous paths and the costs of moving a bedridden man prohibitive. When a man is physically incapable of earning his living he and his family become wholly dependent on the charity of his neigh­bours. There is no alternative employment to physical labour, either in the fields or as a porter.

A man’s life savings and those of his forbears invested in a few small fields can be swept away by landslide overnight with no hope of State compensation and no means of insuring against such disaster. Torrential monsoon rain in one year or drought in another can ruin crops on which existence depends.

Page 7: What is being done now

Gurkha Welfare aims to alleviate hardship and distress, and to provide a limited medical service to all Gurkha ex-servicemen who have served the British Crown and their families. It is administered by a senior serving British officer employed exclusively on welfare work, assisted by twenty-three Area Welfare Officers and ninety-two Medical Packholders. Every request for help is personally investigated, the need assessed and, where approved, assistance is given promptly.

How it is financed

The main source of income to the Welfare Scheme is the sum provided by every serving soldier and officer in the Brigade of Gurkhas, who all contribute a day’s pay a year. ln addition, Gurkha units raise money throughout the year by all possible means. The British Government subsidises the operat­ing costs by paying the salaries of the Welfare Officers and Medical Packholders. None of this money may be used for welfare as such. This does mean, however, that every penny subscribed or donated is used to benefit those in need. Nothing is lost on administrative overheads.

The Army Benevolent Fund and the British Commonwealth Ex-Services League have given and continue to give most generous assistance. The British Legion and the British Red Cross Society have also provided welcome help.

These agencies, however, have many other calls on their funds and they can only provide part of what is needed. Our aim is to raise sufficient funds to ensure that whatever the future may bring, we are able to help all those Gurkhas, and their dependent families, who are in distress and who have at any time served the British Crown.

Page 8: What has been achieved already

As redundancy gathers momentum and the numbers of serving Gurkhas are reduced so too will be the income from their subscriptions. As these same soldiers themselves become pensioners the numbers requesting help will increase proportionately. What limited assist­ance is possible now will be further reduced unless immediate steps are taken to increase by all means the income to the welfare scheme.

This responsibility has been and still is willingly accepted by serving officers and soldiers of the Brigade. These and the members of the Gurkha Brigade Association have, by their own efforts and personal donations and covenants, raised the sum of £150,000. This effort will continue and by the time this Appeal is launched it is expected that this figure will have been substantially increased. This has been achieved in addition to the annual voluntary contribution of one day’s pay. Admirable though this effort is, however, it can only provide a fraction of the annual income required to cope with the effects of redundancy. The Brigade now needs help.

In order to be able to meet all anticipated calls for assistance from the greatly increased number of ex-servicemen and their dependents which there will be by the end of 1971, the Welfare Scheme will require an annual income of at least £50,000. To achieve this the target for the Appeal is a minimum capital sum of £1,000,000.

It will be impossible to achieve the target of £1,000,000 without the generous support of the large commercial companies, institutions and charitable foundations. It is believed that there are many who will wish to show their appreciation for the Gurkha soldier who has served and died in defence of those areas of the world where such companies have major interests. It is hoped that many others will wish to help the Gurkha soldier, who has given so much over so many years to help maintain the economic stability of the world. It is believed that all who hear of this Appeal will appreciate the debt of gratitude we owe to !?e Gurkha soldier, who has been this nation’s most loyal and undemanding comrade in arms through two World Wars and over a period of more than 150 years.

Previous Teaming up with REME to keep our team on the road 8th April 2019
Next The race to Sagarmatha: A Doko challenge in Afghanistan 23rd April 2019
Donate Today